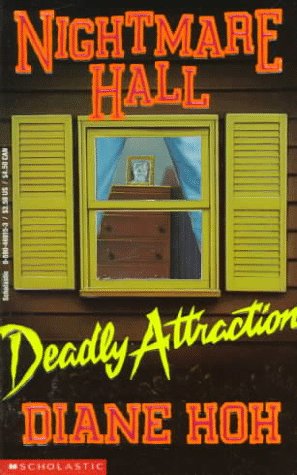 Finally a book in this series without the supernatural element!

Nothing in this book was to blame on a ghost, a scary machine or something else. Everything was 100% human.

And let’s also just say this: I had no clue that that person was the criminal, not until a certain event happened, then I had my suspicions and soon after it was indeed confirmed. Dang, I love when that happens. I think if I re-read it in a few months I might see the hints/herrings, but now I was so thinking it was that person or that other person.

The main character was fun too, I really liked her, though something I have had with other characters as well, I would have loved if she was just honest with Darlene. Just said it frank and honest to her in person that she didn’t want to talk to Darlene any more, or at least until Darlene would stop being a total psycho.

Dear Lord, Darlene was a total nutjob. One moment she would all be girly and happy and yay and flowers and unicorns, and the next she would rip things apart, cry, scream and want to murder things. Man, she scared me to hell.

One thing that I minded though, was the description of the book. The book made it seem like Robert was the main character, or even Darlene, while this is not true. The main character is someone named Hailey.

The story is pretty creepy, and starts off all happy and joyful but turns to psycho pretty fast. It was just awesome!

Also we finally have some connections with the Nightmare Hall. Hailey is semi-friends with Jess and Ian and also knows Milou and Cath. It made me really happy to see those characters again, see that they are doing well and that they are still around.

There is only one little thing I didn’t like (and the other books also had that problem) is the ending. We don’t know what happens to Robert or Darlene, or anyone. What happened to the criminal? Are they still alive? It felt like it was cut off. Like there was supposed to be a whole part there that was cut off.

All in all I would have to say I enjoyed this one the most out of the books I read of this series so far.