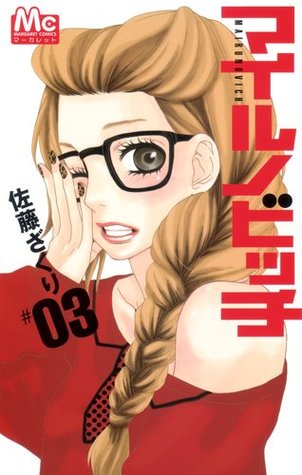 Mairu is a girl who isn’t pretty, well according to everyone on school and outside of that. She never took effort to look pretty either, just wears big clunky glasses, hunches over and takes everything that everyone say about her, and then things change.

The manga feels a bit like a Cinderella story. Girl bullied, gets a make-over and becomes pretty. Well pretty from the outside, because sorry, Mairu is at times just rotten from the inside. Using her prettiness to take revenge on people, lying about things, and various other things. I was at times just shaking my head at the things she does. Not only rotten things, but also she is such an idiot. At times she seems 10-year old and not a 16-year old that she is. I can imagine about the not knowing much about make-up, but there are other things that seem pretty logic and are illogical to her. Also she has so little confidence. Anything anyone would say she sees as magical/miraculous or if it is even a hint of bad, she takes it super badly, instantly being depressed.
She also seems easily influenced, as is apparent in the last 2 volumes. So desperate to keep her boyfriend happy, she follows suit by dumping her best friend who is male. Because, her boyfriend might be jealous and boohoohoo. (More on that later)
And while she does learn, not only make-up but also about boys, I don’t see much personal growth (as in getting smarter, nicer and more confident) in the past few volumes. I do hope this will improve, because while the story is good and sure the characters are also good, I will start rating this story lower and lower if nothing changes with the main character.

The other characters are so-so. We have the good guyfriend, the bitchy is-she-a-friend-or-not girl, the boyfriend, the bossy (and at times confused) older brother. They each have their roles and their stories, and while interesting, I am at times annoyed with how they treat Mairu.

The boyfriend. Urgh I so dislike him. He seems all pretty and sweet and kind, but I can see dark shadows around him. He has already shown he is overly jealous (in a way saying that Mairu must dump her best friend), he has a short temper, is easily influenced by others. Another clear case of: Love makes one blind. And also, Beauty only on the outside.
I do hope we will get some interesting drama concerning Mairu and her boyfriend, because after all that happened in the past 2 volumes I think we will get a nice show-down soon.

In the first volume we mostly see her backstory, how she was ugly (well not that ugly, but anyone look horrendous with those huge/blocky glasses) and turned to beautiful. The second and third volume are about her meeting boys, going on a meeting and getting a boyfriend. I wonder how the rest of the volumes will go.

Would I recommend this manga? Yes, I would. However be prepared to shake your head and be a bit frustrated at the characters.