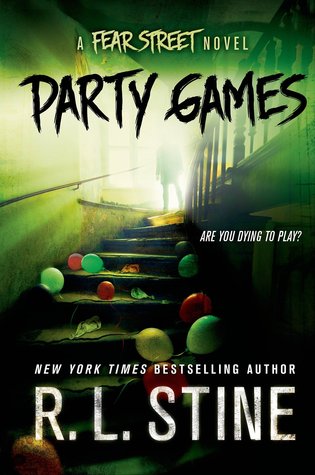 Fear Street is back again! Just like Goosebumps got a revival, this series also is starting up again. And I am really really excited about it. I haven’t read all of Fear Street, due to them being impossible to find, but the ones I read were great.

This book was great, however it gets -0.25 for the main character (especially her actions during the last part of the book) and -0.25 for having 2 plots (which sure, match and mix together pretty nicely, but I still thought it was a bit overkill and would have preferred if he had gone with only the murder games).

Now the main character. I did, really like her in the beginning. Sure she had some odd things here and there, seems to have had some sort of break-up (though she didn’t really tell her ex that, just updated facebook (youth these days)) and she seemed to like to blame her ex for a bunch of stuff. And sure she was a bit stupid, warned so often, and yet she just went to island. Silly girl. Typical horror trope.
During the games and what came after that she slowly deteriorated from quite good to Um girl, what happened to you?
Especially the ending part, that guy did so much wrong, gave you so many nightmares, yet you drool and follow him everywhere still? Hold on? What? Are you an idiot? I know love makes blind, but come on, this was just pathetic.

The story was good, I really liked the games part, and the part following that was also good though a bit unbelievable. And again, I also think it would have been better to just drop that part and continue with the games. Do something more with that part.

But it was really creepy at times, I really had goosebumps and I was really surprised when that event happened. So really points for that!

I saw that there will be more books coming out for this new Fear Street, well I will be following the releases and buying them!