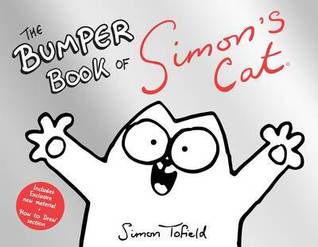 I decided to read this after I have seen multiple animated videos about Simon’s Cat.

It was an adorable book, however I felt with most of the comics that it would have been better had it been made in an animation. Most of the jokes were still funny but lacked the punch that the animation has.

However I did enjoy seeing the 2 cats again. They are so adorable, smart and fun. Especially the older one, though the smaller one also takes his/her revenge on the older cat.
Though, I also felt annoyance for the little one. I know I had the same feeling with Garfield, and when they introduced that small little cat. At times they were good together, but most of the time it didn’t work out, and you can see that happening here to. Seems older cats + newer cats = a bad combination.

Then we have Simon, the owner of the cats (and it seems he has a whole lot more in real life). I really liked to read about his adventures with his cats, at times I felt sorry for him, though at other times I was snickering and thinking: “He deserves that.” or “He had that coming!”
Never reject a cat when he has a present for you, he might just take revenge. Oh and a big one: “Never try to bathe a cat, it will end in a bloodbath.”

A plus-point to the “How-To-Draw” section that was located at the end of this book.

All in all, I would still recommend this book, but I would also recommend people to watch the animations that are out in the world.