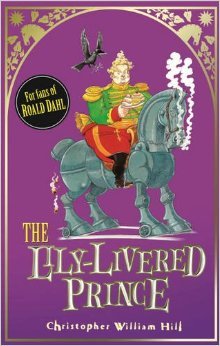 I received this book from the author/publisher in exchange for an honest review.

I loved the previous 2 books of this series, but sadly that wasn’t the case with this one. There were several reasons why I just didn’t like it that much.

For starters, the beginning was very slow. It takes a long time for the story to get going, for it to become interesting. Then we have a pretty awesome middle part and almost ending, and then it dies again with the ending.

Then we have the characters. With the previous books, even though the kids were pretty bloodthirsty, I still felt sympathy for them, still felt sad that they had to go through their lives. I was interested in their backstory, the reasons why they turned into murderers. Then when the stuff started happening I became slightly afraid of them.

However with this book? I didn’t. We have 2 main-ish characters, the Locksmith Boy and some (teenager???) prince. The Locksmith boy was just weird and while he got quite the spotlight in the beginning and also near the end, he totally lost most of the spotlight during the middle. Which is a shame, if I really had to pick between the characters I would go for the Locksmith Boy, even though he barely had any personality. The prince was just horrendous. I hated his whiny, pathetic attitude. The fact he couldn’t man up but would rather just hide and cry in a corner. I hated his guts, I disliked how he only cared for his cakes, how idiotic he was. Somewhere in the story I was just hoping he would just get murdered or beaten, or would learn a lesson. Or would turn to be a rather cool character that would do all kinds of awesome stuff.

Not only that I just felt that the prince was too old. I am sure he was only like 15 or 17, but often he seemed like 18+ and I didn’t like that, since all the other books featured children.

The other problem I have was that it was a lot about war, war, war, war, war, pastries, war, politics. I don’t mind war in a book, but it shouldn’t take over everything. I just couldn’t connect with the story. I just started to get bored pretty soon.

Then we have the stretched out ending. I just didn’t like that. I loved that they did their things and things were solved (not saying how or what), but then it just continued for another 50 pages. I think it would have been a much better book if it was ended when they solved stuff.
But I can also see why the author continued with the story, he probably wanted to throw in some murder and excitement, but for me the book was over and done with when the solved things.

I do give bonus points for adding that guide to Schwartzgarten, I really enjoyed reading that one, and I do hope we will get some sort of novella with a nice fold-out map and fun details (akin to Discworld). It makes me happy, since I know that in previous reviews I have asked about it. 🙂

It also delighted me to see we will get a 4th book, this time with a kid character again.

Still I will give this book 3 stars, since there were enough parts that were fun, and it was interesting to see how the story turned out (yes even with the overdose on war, war and war). And the enemies were properly evil and cruel.