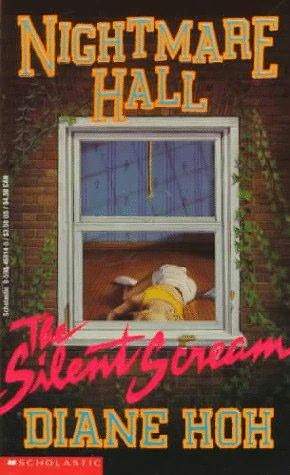 My first book for my October Horror Month Fest in celebration of Halloween.

You can clearly tell the age of the book, a lot of things are old-fashioned, there is no mention of cellphones/smart phones. Having a computer is not happening and you can only find them in libraries or in schools. And a few other things. I really like that, and it is also a big reason why I read these books. Things get a lot creepier when the main heroine doesn’t have a smartphone to call someone when she is alone in the dark with a murderer on her tail. People really have to think for themselves and make-do with books or their own wits instead of relying on internet.

And creepy, well this book was all that. You got a real mystery on hands and there is also the supernatural element.

Around the middle of the book I had about 3 suspects that I thought had something to do with Giselle and also with our main girl. Then nearing the end I had 2 suspects left and I had really a lot of fun trying to figure out who did it, who it was and why?
I really like when a book makes me think and makes me want to figure things out.

The story itself was great, I really liked it. Though there were points at which I wanted to shout at the main character. Typical horror story things. Like her going in the dark to the cellar, or her researching things on her OWN. This is how people get killed girl, really, you should know!

The characters were interesting, they each had their secrets, personalities and goals, even if they weren’t all main characters they at times felt like it. Because mysterious things happened to them, and because they also had a backstory to tell.

All in all, I would recommend this book, though don’t read it during midnight (what I did), there are some spooky/creepy parts that gave me goosebumps. 🙂