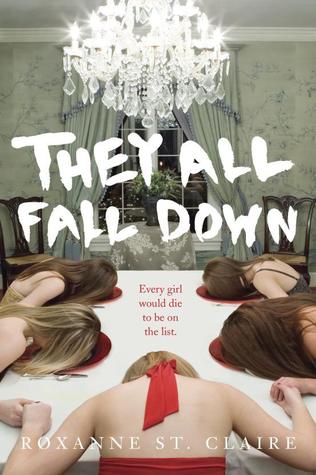 Both the two mentioned are very different from this book. Final Destination: You cannot escape death and it was all supernatural and the main characters had some kind of premonition.
This book? You can escape death, and it is not supernatural. And no premonitions or whatever.
Pretty Little Liars: a group of friends and a murder + lots of secrets. This one has multiple murders and the people mentioned aren’t even friends for most. And secrets? Nothing between the group themselves, but more like the secret is about the list and deaths, nothing to be blackmailed with and such.

Too bad, I was kind of looking forward to the book because of that Pretty Liars x Final Destination thing. 🙁 At least -1 star for that.

So, after reading the book completely, I am making it a 1 star. This book doesn’t deserve any more than that.

The ending? A cliffhanger? Seriously? With a standalone? Or are we getting more books? I do hope not. I hate it when standalones turn into series.

Also that cover. I liked it, and then I found out there are 10 girls, not 5. 10 girls who can be killed. Why are there only 5 on the cover? No clue, but it is something I also look at when evaluating a book.

Now for the characters. In short I didn’t like them that much. Kenzie (Or Mack, or Mac or Fifth or Babe) was just annoying. Her ability to read Latin? Nice touch, however it was highly disappointing when she had to translate something and only could do the basics and nothing more. I was just laughing and shaking my head at that.
And she kept saying that she didn’t care about the list? Well lets just say she made it sound like it was a big deal. The list and why she is on it is mentioned every time, practically every page. No no, you don’t care about it… *rolls eyes* I also didn’t like that she wasn’t honest with Josh. Just tell him honestly about what you think about him. Don’t kiss and such and just act with it, and in the meantime kiss and play with another boy. I hate things like this. Make up your mind, you can’t have both, and you don’t even want Josh.

The list and the curse? Oh so much of a disappointment. I thought it was some sort of supernatural thing (like you are on the list and suddenly accidents!), but instead it turns out to be

Then we have the last part of the book, or I should say: The boring, unbelievable things that happened there and which were utterly boring making me skip a bit, read a few, then yawn, then skip and so on. I think the book should and could have done with a lot of pages less. I think that would made it a 2 star. Now get rid of the silly whodunnit and I would raise it to a 3 star. More than that, nope. We still have the cover and the catch phrase that failed and add to that silly characters.

It is too bad, I was really looking forward to this book. 🙁 Would I recommend this book? No, I would say watch the Final Destination movies, they are much better! 🙂