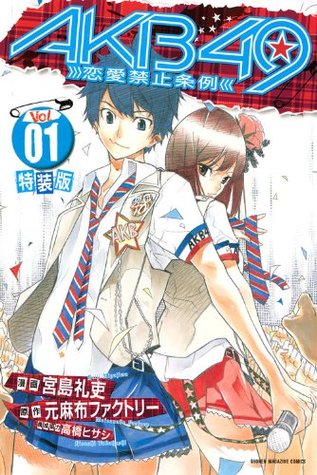 Well that was one weird little manga. Not really sure if I like it or not.

It is good, and also interesting, however our main lead is a guy and doesn’t even try to hide it much that he is crossdressing (considering he changes and turns to guy while still at the AKB building). I also don’t get why nobody sees that he is a guy. I mean, sure we as the audience know that he was a guy, and is now dressing as a girl, but I don’t know, he just lacks that girl power, the sense of a girl. And well seeing his disguises… I am absolutely amazed that no one saw through that.
But he is also a nice guy, doing his best for a girl, but later on also his best for the group.

I really disliked most of the AKB girls. Seriously, the attitude those girls have. Just because they normally get everything they want they shouldn’t act like fricking princesses all the time.

I really liked the inside look in the AKB stuff, from lessons to auditions to shows, it was all very interesting. And yes I am not a fan of AKB (I don’t like there songs, or some of the things going on in there), but I am always interested in the whole idol thing.

Well I can’t wait to see what will happen in the next few volumes. I will at least give 2 a try, and see if our main character becomes more feminine or that he gets busted. Maybe me, but I would like to see him get busted and see him get out of it.