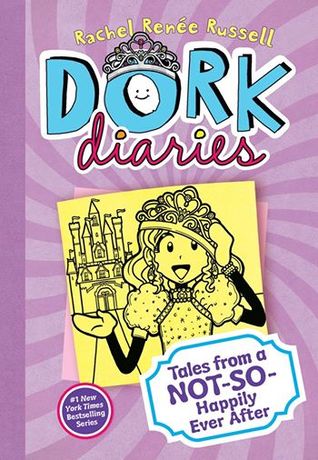 Slightly better than the previous books, but still not good enough for me to continue with them. I am giving up on this series.

I liked that this time we were in a fantasy/dream world with all kinds of fairy tales, stories and more, however, it fell kind of short due to the characters. Every character that we met in the Dork Diaries is there, as some kind of fairy tale character. Of course, Brandon is a prince (ah duh), Mackenzie is the evil witch, Brianna is the godmother (and failing hard at that) and so on. It was a bit lame. I kind of hoped that we would get some new characters, but no.

Again, like I said in my review for the previous book, the books keep on having the same kind of story. Mackenzie is always evil and always bitchy, Brianna doesn’t act at all like her age (I would rather peg her to be 2 or 3 years old and not 6). Brandon is always swoonworthy, though I really still don’t see what Nikki sees in him, he is so easily pushed and swayed by Mackenzie. And then we have Nikki. Still dorky and still trying too hard and too much to be popular. I also get a bit tired of how she talks. A bit too hip and too childish.

And seriously, Brianna and Mackenzie just piss me off so much. Seriously, Mackenzie should just get kicked from school for all she does and Brianna needs parents, and not a sister. You can clearly see that Nikki’s parents don’t care what Brianna does, don’t care to educate her or punish her when she does something bad. No, no instead, just laugh and make pictures or whatever.

So yeah, I am giving up on the series. It was a fun series, but like with Wimpy Kid, it just keeps being the same book with a little bit of a different setting, but nothing changes with the characters. It is too bad, but oh well. I got enough other books to enjoy. 🙂