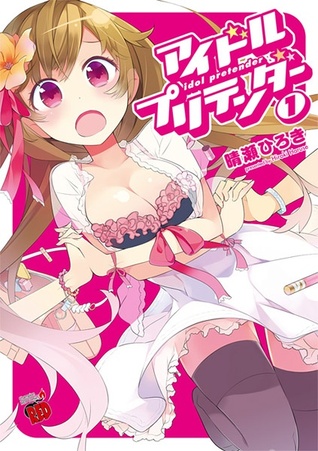 Review for the complete series!

I was searching for a new manga and I found this one, oh my it was super hilarious and at times a bit cliché.

Our main character is sick and goes back to the dorm, he eats something he thinks are cold medicine, but finds out it isn’t when he wakes up and finds out he has turned in a girl. Yeah, a girl, 100% a girl.
His friend tells him to become an idol, so he can earn money to buy a new potion (this potion is a few million yen). And thus our adventures begin.

I loved the main character, how at first he was a boy in the body of a girl, how he was totally and definitely still male even underneath all the boobs and stuff. But throughout the story you will see him change. He tries less his best to get a potion, he falls in love, and he becomes more and more a she.
I loved his dedication to the idol business, I really like manga (and anime) about the idol world, and this one showed what a beginning model is going through (taking jobs everywhere to make a new, photoshoots and more). It seems our main character is pretty much a natural at things.

Then we have a whole slew of other characters. Our main character isn’t the only one going genderbender. No, no, we got a few more who are not what they seem. It was really fun figuring out who they were.

And those characters, they add to a whole lot of the fun and chaos in this book. Our main character creates quite a harem, filled with traps and with girls.

There is a bit of ecchi, but for once I don’t mind it that much. This ecchi fits the manga. Like accidental undressing, or our main character finding out about his body or various “accidents” between characters (like them bumping into each other and so on).

I am a bit sad with the ending, I had hope for a nice plot twist in the end. But apparently they went for the easy route and picked that person. And then after that no explanation if they got together or not! I really dislike that. At least give us a definitive answer.

The manga is also quite short with only 3 volumes, but I think that they did well on that, I can’t imagine another volume, I can however imagine another chapter with some information on the ending.

All in all I would recommend this manga if you are looking for an idol manga, or just need some comedy in your life! This manga is really awesome and I hope to find another one like it.

4 thoughts on “Review for Idol Pretender Vol.1 to Vol.3”