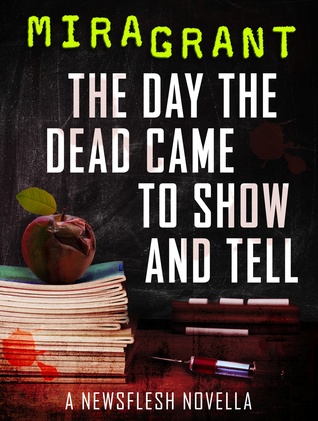 First of all this was one f-ed up book, seriously disturbing, scary and wth.

I really was engrossed in the book and I couldn’t drop it even though at times I wanted to throw with it.

First of all the kids. Yes, I know they are kids, but come on, they have gotten all those rules in their head, their parents and teachers and everyone warning them about blood, threats of said blood and more, yet there is one stupid ass kid who just got wounded and decided: “Oh hey! Let’s say nothing about it!”
Result? Another kid, well over the threshold got infected, resulting in a total zombie outbreak. Now that kid that got infected? He is an idiot as well. I can slightly forgive a 6/7 year old for their stupidity, however I can’t forgive a kid that is 4 years older (at least). Oh let’s not say anything, oh let’s not wash my hands, because that is for sissies. *rolls eyes*
So yeah, frustrated much!

Also the ending, I was expected something to happen with the people who wrote the article about the accident, however now nothing was much done, and I felt empty and disappointed. I went through the book, went through the articles, the chat conversations and more, for a lame ass ending.

The zombie parts and the whole we have to save the little kids part was great and like I said, I was engrossed in the story, hoping and cheering for them, even though we already knew the conclusion thanks to the news articles.

I was also shocked at how everything seemed to fail. Security, the whole checking up kids, the whole layout of the school. Seriously, what is wrong with people? Zombies and infection are still a big threat and you have security that fails like this? And cell phone/wifi blockers? What kind of sick mind thought that was a good thing to add?

But all in all, I just can’t rate this story higher than 3 stars, I think, if I have to be very honest, it would even be closer to 2.5 stars.