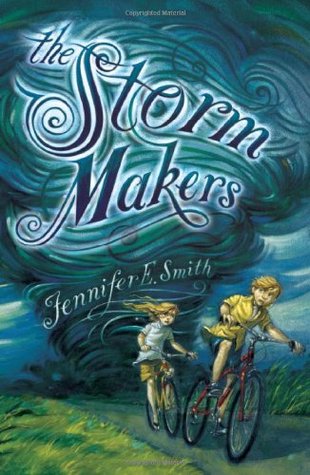 This was a fun book, I don’t really feel like writing a big review, but I want to share my thoughts.

I liked the idea of Storm Makers, controlling, fixing and helping the weather. Helping people or in case of evil Storm Makers destroying things.
I would love to be a Storm Maker, though please not of the earthquakes (we saw what happened to the Storm Maker who had that one), I would rather be of the rain or storms.

Our main character Ruby is a wonderful girl, brave and smart. I liked her better than her annoying brother.
I just wish she had gotten more show time, now she sometimes fell back in the shadows of her brother.

Next to the annoying brother we also had a bad guy. God he was annoying. Only thinking of revenge because boohoo things happened. Instead of thinking, instead of asking, he immediately thought that X had brought Y to some place dangerous and so on. Seriously, and then what do you do? Oh, hey I know, let’s destroy several places and kill humans! *rolls eyes*

Then the ending, I saw that coming from way in the beginning when Simon first got his magical powers of awesomeness. Bit disappointed that it really turned out that way, I was hoping for some kind of twist, but instead we get something like this.
Also on the ending, so we will get a book 2? Or are all the hints just that, hints and nothing more, it would be very disappointing if they just let whatever happened in the ending go and not make a second book.

The illustrations are one big part of why I picked this book. I love Brett Helquist, he is one of my favourite illustrators, so I just had to have this book. 🙂

All in all I would recommend this book. It is magical, it is funny and it has awesome things like controlling the weather!