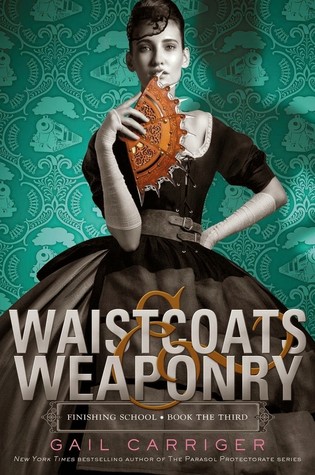 Another book in this awesome series (I should also really read the Parasol Protectorate series!).

However there were several things I didn’t like, and I will start with those to get them out of my system.

For one, I expected more school, more lessons, more boarding school fun. Instead we only get a small bit about it and then it is off to balls, stealing trains and more. I really had hoped for more poison lessons, more seduction lessons, more vampires, more climbing to meet with Soap, maybe a few balls with all the other girls included.

Then we got the last part, and I will post that under spoiler tags, because I just need to rant about this. Ah that feels so much better now that is out of my system!

Also something I found too bad was the fact that quite a bit of time has passed since events from the last book. It is a shame, I would have loved to know about what happened after things happened, maybe some lessons, maybe some other things.

Now for the good things. We have a new weapon (yeah for fans with blades, I want one too). And Sophronia has a wonderful talent for using it and also using it in combination with other things.

I also loved the seduction class and how all the girls were giggling, blushing and in general just totally shocked with all the things they learn there. It also shows how girls are generally kept away from all this, because these days it is quite unheard of that a 15 to 17 year old doesn’t know about all this.
I had quite a few laughs at the whole chapter, it was too bad it was over so soon.

We also have a little part about the Professor Braithwope and how he was totally crazy (or is he?) because of events that happened earlier.

And I loved the story and also what happened to Sidheag and her family, it was a sad event, but also brought some excitement to the already very exciting book.

I did like the train journey and the events that happened on it.

And did I say I love the cover. I am so happy they all match and that each one gets better and more fun.

All in all though I did like the book, but as you could read there were also enough things I didn’t particularly like.

I will be waiting for the next book, hopefully soon, and hopefully it will have a bit more finishing school, though I guess not, considering the events in this book.