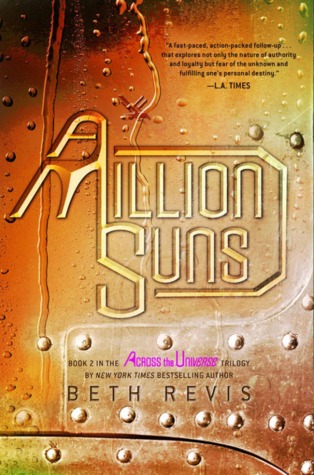 Luckily this book is clearly not suffering from Second-Book-In-A-Series-itis. However, I must say I liked the first book more.

This for various reasons. Let’s start with the people. I know drugging people to make them obey is not ok, but I think it would have been better if they had been drugged. Seriously, they get the chance to have their own opinions, to have their own things, and what do they do? Revolt, rape, murder, steal, don’t work and a lot more. I was just sick and tired of them by 1/3 of the book and I dragged myself through all the rage and such.

Luthor was a disgusting character, I hated him and I hated how he raped and murdered people because he could and he apparently liked it. He is also a big reason why I didn’t like the book that much. I didn’t understand how someone could get away with all of it.

Amy and Elder, I was sad to see that there was barely any romance between them in this book. I had hoped for a bit more, considering the events of the previous book. Too bad the only things that happened were fights, a few kisses, a few looks and that is it.

Amy is still my favourite character, though I will still stick with the whole: She should think a bit more. She often just does things even when she is warned or asked to wait with things. It amazes me that she survives throughout the books. But still, she is my favourite character. I can mostly understand her. She is from earth, a true earth girl through and through, and I can just understand how one must feel to wake up, miles away from home, on a ship. Finding out there is no way out, there is always the walls, always artificial lights.

Elder was so-so. I didn’t particularly like him in this book. I think he is doing too much at the same time. Like for instance, I liked that he tried to get the population of that drug, but I think he should have done it slowly. Now it is instantly poof and that is never a good idea with drugs.
I didn’t like his attitude towards Amy. He even called her a freak, something he promised he would never do.

But the last part of the book picks up and brings us a lot of action and excitement. I really loved it, and I can’t wait for the next book.

All in all, a book I would still kind of recommend.