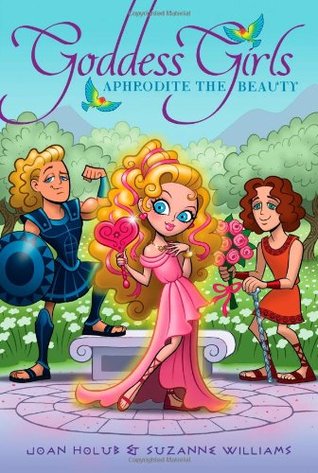 However, I didn’t like our main girl this time. I loved Athena and I loved Persephone, but sorry, Aphrodite is just a conceited little bitchy girl who can’t have it when others get the attention of a guy they like. Add to that, that the girl who gets the attention is one who doesn’t care about it and only participated in the make-over because you pushed it to her.

Most of the book is about Aphrodite being a whiny, spoiled and overly jealous girl. Instead of how she was in the previous books (also a bit like this, but not that overly done) she is totally different. Jealous of her friends, being rude to guys and I hated her attitude to the one boy who liked her. She should have said no to him way faster instead of going along with it. I really hate it when girls are this shallow. Oh dear, this boy he is: (insert list of things not cool about a guy). I also didn’t like how she kept drooling over Ares. Didn’t we already know that he was a bully, mean to the core?
And why can’t she trust her friends when they clearly say that they aren’t doing anything on purpose? Or that it is not what it seems?

Also that part with the dress? Seriously? You are overreacting because of those 2 things? You can also just tell your friend about it nicely instead of aggressively.

Luckily there is still enough mythology and some fun stuff so I am still rating it a 3 stars, however if Aphrodite had been a bit nicer I would have rated it higher.

Of course the book ends with an all well, end well. Which frustrated me a bit, but I guess it was to be expected from a children’s book. They tend to do this kind of stuff.

I did love the payback the main girls did. I hope Ares and also Medusa will learn a lesson in things. Though I doubt it, since we are talking about 2 very bad guys.

All in all, this is one book I was happy about when I finished. I do hope the next book about Artemis will be much better, and otherwise I will just learn to skip certain characters.