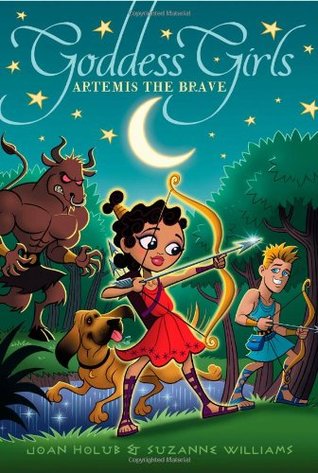 This series is now dropped. The complete idiocy and stupidity of the characters, the lack of actual story, and some other things. I have enough other things I would rather read.

Let’s start with this book. We have Artemis, a girl I was really looking forward to. She seemed awesome, sensible and wonderful… however, she is just as all the girls. She meets a guy and instantly becomes dumb as a rock. Seriously? How did she not notice he stole her arrows? I thought she needed practice, like every time she could? Yet 2 weeks or so go by and apparently she never practised and only noticed the arrows were gone until the contest…. Wait? Plot hole much?
How did she not notice that her arrows were fake? I thought they were magical and would come to her when called? If that doesn’t happen and they look a bit weird, why do you even go to the contest and why don’t you just search to find your real arrows. I know, time and being in a hurry might be a cause, but I just call plot hole.
Also what happened to sensible and smart. I know love makes people blind, but so blind that she never hears the warning signals, that she doesn’t care what her friends think, that she is apparently so blind that she lost her eyes completely?
I really hated her attitude and how she acted.
I mean the book can be summed up as such: Bleh boys, OMG ORION <3 <3, Insert more Orion, Orion, Orion, various plot holes, hearts and drool and then heartbreak.

It took her almost the entire book to find out what kind of a dick Orion was. Gee, girl that took you long. I already had that suspicion since the first time we saw him! And with me all the characters in the book. *rolls eyes*

And then she is like, boohooohohooo when her brother is angry with her. Of course he will be angry with you, you have been a complete moronic being for the entire book.

Add to that the whole: “OMG the monsters can hurt us now!!!” Omg, you are all goddesses not like a little wound will kill you. So stop crying like babies and do some godly actions or something. Sjeesh, what do they teach you at this school you are at? Oh wait, we already know that, nothing.

This book was just drama, drama and more lame drama.

I wish these books were more like the Grimm Girl Series. For the first 4 books you had 1 story and with each book we switched character and they told their part of it. This one is just not my cup of tea. Too much lame teenage dramarama, bad stories, bleh characters and some other things I don’t like.
The whole mythology and the whole boarding school part is fun, but I am not going to drag myself through books just for that.