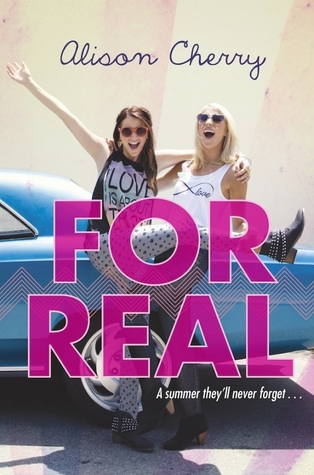 4 stars, if only that bitch sister Miranda wouldn’t have been in it.

It would have gotten a 5 stars then, but now, sorry I was just frustrated a lot of times because of miss Uberbitch Miranda, who acted like she was soooooo effing prissy and wonderful and special and oh her sister sucked so much, boohoohoohoho rolls eyes. Oh and the fact that after everything that happened, they magically bond together and booohoohoo everything is magically fine. Fuck that.

I was truly looking forward to this book. Roadtrips? Revenge? Bonding? Reality Shows? Yes, yes and more yes please! Sadly it didn’t turn out to be that good. 🙁

The roadtrip never really happened. Not in the way I was expecting (especially considering the cover had a car on it) and the bonding? What bonding? The only thing I saw was bitching and a big sister who still thinks she is better than her sister and that her sister is a baby. More on that later in the review.

The reality show aspect was done quite well and I loved it! I also loved the little twist and the reactions of everyone participating. Dating + racing over the world + reality shows = wonderfulness. I really enjoyed that aspect and how the characters changed or showed their true colours. The whole racing over the world was awesome. I loved the things they had to do, loved seeing the world through our main characters eyes. Loved seeing her run, try to the puzzles and all the challenges they had to do. I just wished the challenges were a bit more romancy/steamy. Now they were pretty much boring. Only a few challenges were a bit steamy and the rest was just normal stuff. When I heard steamy, I thought things like having to feed your partner by mouth or massage your partner or other things, but instead we have them searching for foods, we have them finding things on/in things.

I loved our main character and her (useless) trivia of all things related to Reality Shows. I also liked how hard she tried to be better, tried hard to kick-ass, tried hard to not crack when her sister was evil again. How she broke down, but got back together. I am sure she has her faults, but she does her best to show the world she can handle them now, that she is a big girl who has guts and a good head on her shoulders.

Oh and I hated Will. I already suspected it was what was revealed at the ending, but I still felt sad that it was really true. 🙁 Bad Will!

The revenge part was sadly a bit of a disappointment. Maybe because the 2 sisters can’t be together and have to fight to win with other partners. Maybe also because I just didn’t care about the big sister who lost her boyfriend any more. Maybe also because the whole revenge plot became kind of a third wheel. With first wheel our main character and how she wants to proof herself to the world (and especially her sister), and then second wheel with Will and what goes on with him.

And like I said at first, a big reason why I didn’t like the book is because of Miranda. I am sure if she wasn’t so stuck-up, wasn’t so downright intended on mentally kicking and stabbing her sister with all kinds of things, if she wasn’t all that and more I would have liked the book more. Now it just destroyed it. And again, I hate it when books just magically do things and poof, everything is fixed and they are best sisters once again! No, that is not how it works. If you break someone mentally like this, you don’t just get magically together again.

All in all, I am not sure if I would recommend this book. On the one hand, it is a good and fun book about reality shows, but on the other hand, it has a character in it that is pretty much evil and also the whole roadtrip is a lie part.