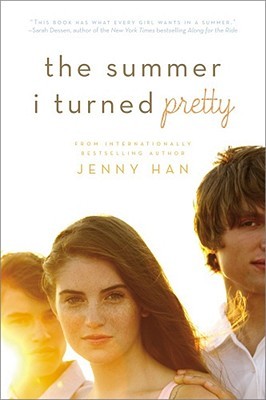 Let me just say this, the book started off pretty good. We had an interesting story, flashbacks to the previous years, and then shit hit the fan.

First up, Belly. Who the hell nicknames his kid Belly. Come on, and again, why would everyone still call her that even when she is 16/17. She clearly stated she doesn’t really like it and would prefer to be called by her name.
On that note I thought it was her name until we finally found out that she was actually called differently. I was already wondering what kind of strange parents she had that would name their kid Belly.
Now, Belly, what a complete mess of a character she was. Totally oblivious to everything around her with the exception of her light, sun and god Conrad. Yes, god. I just got sooooo sick of her obsessing over him constantly. She was constantly either drooling, desperately trying to not look/drool, desperately trying to deny the fact that she LURVES him and desperately trying not to kiss him. And come on, this is not a crush any more. 6 years of unrequited love (mostly her fault, because she only could drool) is not love any more, especially not in this case. It turned into a big obsession causing her to not think of anything besides Conrad.
If only she would have drooled over him. Instead she strings along Cam (wonderful boy, more on him later) and Conrad’s brother Jeremiah. She even dates with poor Cam while all of us can clearly see she is just desperate to forget her GOD Conrad. I just wish she was a bit more honest towards Conrad and also Jeremiah. Stringing along boys is a big no no in my book.
I also hated her attitude, and I was not amazed when she finally found out the truth about Susannah (again, no big surprise to the rest of us). Because of course, instead of wondering what is up with Susannah, maybe worrying about it, she focusses solely on boys. And then of course she is sad and dejected because booohooohooho no one told her. Oh, f you girl. If you had spend some time with your family instead of obsessing and trying to string along guys, you would have also spotted it.

On the Susannah thing. As soon as I learned of her previous illness, I knew right away what was wrong with Susannah, and that is wasn’t the imminent divorce (what kind of dick divorces his wife during such a time though. Seriously, I can see where Conrad gets his attitude from), but instead the thing that is now happening that caused her to be like she was during the book.

God, Conrad, he was, just like Belly, horrendous. I hated him and his attitude was horrendous. Even though I knew why he acted like that, I still couldn’t like him. I just wanted to smack and shake him. Get some sense in him. Belly is old enough to do her own things, you don’t need to act like such a dick towards her. And going to alcohol and other bad things? Sorry, no. Just talk with people, just be there for people. Weak, stupid and annoying wuss.

The only characters I liked were Cam and Jeremiah. Why not Susannah? Because by hiding whatever was going on, she made things 1000 times worse for all parties involved.
Cam was a wonderful character, and I loved him. Though I thought his things were a bit too weird and coincidental. He is a total opposite from Conrad, and I felt like the writer was trying a bit too hard to create an opposite from Conrad.
I hope Cam will find someone who will truly love him, and not just date him for the sake of forgetting an obsession.
Jeremiah was an interesting character, I loved how he cared for Belly, and I loved how he did things. He was an interesting character and I wished we could have had more scenes with him.

I liked the flashbacks, I liked the idea of the book. But sorry, obsessive girls? Characters with an attitude higher than Mt. Everest? Mothers who hide truths? No, no thank you.

That ending, I hated it. I didn’t think it fitted and I think everything went a bit too fast, which in turn caused it to be highly unbelievable.

All in all, this is one book I wouldn’t recommend.