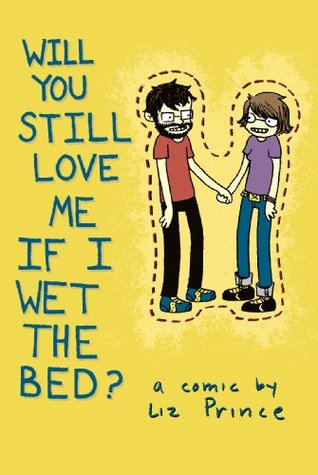 The next and last in the Liz Prince books (though not the last in reviews).

This one is all about Liz and her boyfriend Kevin. All of it. It was really fun to read it, though at times I was a bit disturbed with things in there. Like the whole pee thing? Hugging while someone is peeing or peeing over someone else their pee…. Eww, and no thank you. I can imagine there might be couples who like doing this, but I don’t need to know. Also the one comic about cheetos (or whatever they were) and that Kevin put them in Liz her underwear…….. No.

However, there were several things that I recognize from my relationships and they had me nodding along or cheering.

It was a really fun book and I had several times that I was laughing out loud at the comics or showing them to my boyfriend. 🙂

Also +points to the title, that one really drew me in.

I would say that this book is 16/18+, this due to various things like sex, boners and of course the whole peeing thing that they seem to love so much.

The art was something that was really lacking. You can clearly see the difference between the now Liz and the then Liz. Or maybe she just didn’t have a good editor back then, but sorry, the art was at times just a bit ugly. There were helplines (again, no clue what they are actually called, I will just call them helplines) and sometimes I had to really look close to, for instance, see that what she was flashing were boobs not just roles of cookies.

But all in all this was a fun book, sad though it was so small and short. I knew it was short, but it was a really tiny book.