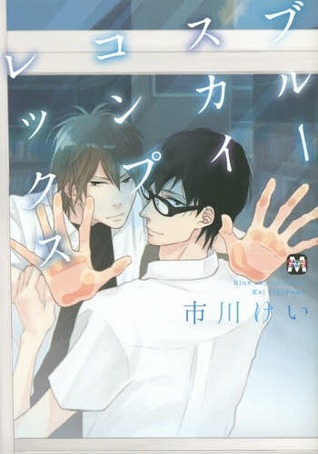 Well this is an awkward, but fun manga.

It is only a one-shot and only 6 chapters long, but despite this, the story is complete and has a pretty nice ending.

Our first main character is the dark and serious Narasaki, all he wants to do is sit and read. However, at home he has 2 little brothers demanding attention and at school he must “babysit” a guy that is seen as a delinquent.
I really liked Narasaki, though at times I wished he would just loosen up a bit, lose a bit of that stiffness and live his life. Maybe even saying no to his little brothers and ask if he can have some time for himself.
He was also not really the smartest when it comes to love. Sure Terashima isn’t that clear about it and relies on actions more than words, but I would say if someone kisses you like that…. that you should know it is more than a greeting. It was kind of fun though to see him doubt things, to see him wonder what it meant. Even asking his brother about greetings in other countries.
Narasaki becomes much better in the later chapters, and let’s just say, I didn’t expect him in that position. I thought that would be where Terashima would be. Ssh, no spoilers. 🙂
Though now that I think of it, maybe it was hinted in the way Narasaki and Terashima interacted at some parts.

Terashima was an interesting character. Even though he has a strong bad boy/delinquent vibe, I could also see he was just hungry for love and someone to accept him as he is.
I think he should have said more, instead of shoving tongues in someone’s throat, but hey.
I liked how he was with Narasaki. It was at times a bit awkward, but I could see they really matched together.

The book is mostly from Narasaki’s POV, but at one time it switches to Terashima. I loved that the mangaka did this. It made me understand and like Terashima even more than I already did. 🙂

However, I wouldn’t recommend this book for under 17 years. There is one scene where one of the main guys masturbates and you can see part of a penis + some other things. The action between the guys is mostly just stripping + kissing, no sex, but still I can imagine you don’t want to show such steamy scenes (since they are that) to someone who is under 17.

The art was decent. Not always good, but not really bad either. Just average.

All in all, I really liked this one. It isn’t love or super like, but it was an enjoyable manga and I would recommend it if you are looking for a new (and short) Yaoi/Shounen-ai manga.