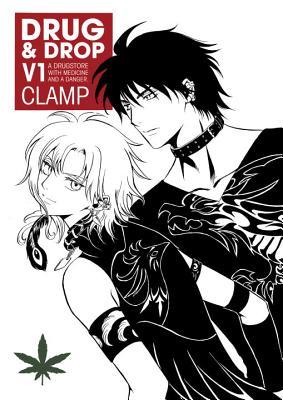 Legal Drug is back! *cheers* It has been years since the last volume came out so imagine my joy when, last year, I heard that CLAMP is making a new series and that it will be coming out in English!

The book was terrific fun, it took me some time to get to know the characters again. And I think it might be best if I also re-read the first series again. It has been almost 10 years since the last volume came out. So yeah, it was really confusing, however quite soon you will get back in the flow of the story and you will feel comfortable again with the characters.

I would also recommend that even if people read the first series to also read the XXXholic series. The Watanuki that appears in this volume is one that is from the last volumes of the first series/new volumes of the new series. There is not much that will get spoiled, but you wont recognize this Watanuki and might be really confused as to where the other characters are from XXXholic and why Watanuki is seemingly alone in the shop.

The story of this volume was fun, it was fast-paced, there was no time to relax and enjoy the scenery (or the hot/cute boys for that matter). One moment this would happen, and then bang the next is already coming at you. So be sure to keep your eyes open and remember everything that is said and done. It will probably come back later.

However, there were some stuff that was weird. I am not sure if it is typical CLAMP or that it is a plot hole. Most of the people who read XXXholic know that Watanuki often went to the drugstore to get medicine or something else for Yuuko, however, the 2 main characters DO NOT recognize Watanuki at ALL. So I am wondering, is this a plot hole? Or is this another timeline? I really hope things will be cleared up in the next volume(s).

The art was, as expected, awesome and beautiful. I really love CLAMP’s style and they keep getting better with each series.

All in all, I would recommend this manga, but only if you read the original one and also XXXholic.