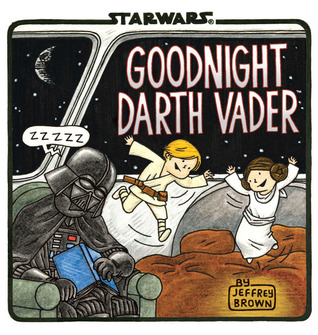 I heard a lot about this series of books and I decided to start with Goodnight Darth Vader, sadly it was just not meant to be.

What I expected was: Leia + Luke causing trouble in the ship because they don’t want to sleep. Insert lots of hilarious situations and a Darth Vader trying his best to be a father. What I got was: Darth Vader putting kids to bed and telling them a super boring story of how everyone is going to sleep. The ending was bland and just sad.
Maybe if I hadn’t know what to expect, maybe then I would have appreciated the book, but now I kind of knew what the other books were about and thus this one was the odd one out.

I think the fans of Star Wars might love this one as many of the characters pop up. We see the Wookies, Han Solo, Yoda and various other characters. In the first image they are all awake and in the second one they are all asleep.

The art is decent, but I wouldn’t call it good. At times things look strange and out of place.

All in all, I can’t rate this higher than a 1. Even though the book is short, I had trouble getting through it. The only reason I pressed on was because I kept hoping that maybe the story would change. Too bad that it didn’t do that.