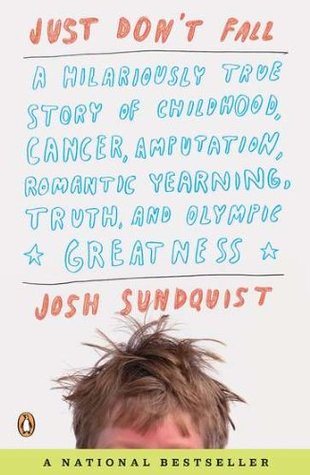 I loved Josh Sundquist’s other book about how he failed with girls, so I was really interested in reading this. And let’s just say it didn’t disappoint, but it wasn’t as good as his new book.

There are several reasons why. For instance, I liked the first part of the book, which was about Josh and the discovery/recovery of his cancer. It was interesting, and especially since I don’t know that many people who can recite what they said or did exactly when they were 9-year old. I am guessing his parents must have told him what happened, because sorry, I can’t imagine that anyone knows much about his/her childhood, at least not up to the exact words. The fact that he knew (or at least made it seem so) made the story a bit unbelievable.
Still it was interesting and I had a few times that I had to laugh at Josh and how he acted. He seemed quite wise for his age, saying things that I don’t really see 9-year olds say.
Back to the whole cancer part. It was very interesting, and at times very painful to read. I felt sorry for him. Losing a leg when you are adult is bad, but when you are a kid and a very active kid at that, it is horrendous.

I also applaud his parents for telling him 90% of the things that happened. Not many parents do this, but I would highly recommend that they do it. It might be scary and it might make the kid cry, but I wouldn’t want my kid to die without knowing what hit him or her.

The other thing that I didn’t like was how there was a whole lot of focus on when he was 9, then a small part about his High School stuff and then a whole lot on skiing. At times it got a bit boring. Especially the latter part. I don’t have that much with skiing, and while I knew there would be a part about skiing, I had actually hoped it would also be about the soccer in which he participated. Especially since we all know how badly he wanted to play said soccer. I kind of was looking forward to him finding out he can still play soccer!

There is also the matter of years and things just disappearing. One moment you would be reading about his spots on his lungs and the next it is a year or maybe even 2 years further and we never find out what happened to the spots. And that is how it goes for other things as well. At times I was just utterly lost, wondering what age Josh was now. 12? 14? 17? I just didn’t know, and that is a shame.

Then we have one last thing that I didn’t particularly like. And don’t get me wrong on this one. I am also religious (just not as much as Josh and his family). I got a bit tired on the whole God and religion part. Especially as I was just shaking my head at little Josh and how he saw certain things.
But the whole religion part played a HUGE role and at times I just wanted to close the book. Especially since this was the stricter kind (cursing is blocked, certain shows are banned, and a few other things).

But there were enough other things. Good things. The way Josh tells us the story, at times (even when things are looking badly) he tells it in a funny way or adds some jokes. I really like his style of writing, and I hope he can keep it up if he writes more novels.

All in all I would recommend this book. However, take in mind the things I said. If you don’t like the overly presence of religion, or the fact that years can jump around, then stay away. Otherwise try this one. 🙂