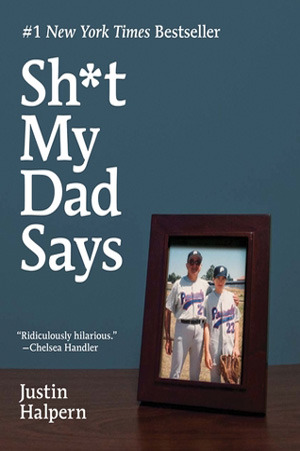 Sadly it was just getting boring with each age. I loved the part of his childhood, it made me laugh and it was great. However starting with his teenage and adult phase, it just got boring and more of the same thing. Even the whole story part just didn’t interest me and I skipped to the quotes. But even those got a bit boring around the last 2 stories.

What I expected was something totally different. I had expected a book of quotes with some funny pictures. However, we get a story about a certain event happening (going from childhood to adulthood) and then we get a few quotes. The stories were funny, at least the first few, but like I said in the previous paragraph I kind of got bored with them, since they were mostly the same story just wrapped differently.

I did love the dad though. Even though he cursed a bit too much for my liking (especially near children), he has a heart of gold and you can clearly see he really cares about his kids and wife. One thing I didn’t expect was that he was a scientist. From all the cursing and how he saw things I expected something different. Don’t get me wrong, but in general I don’t see scientists or doctors cursing like this or acting like the dad did. It was a bit strange.

All in all, I would recommend this book, just be warned that it a lot of the same thing.