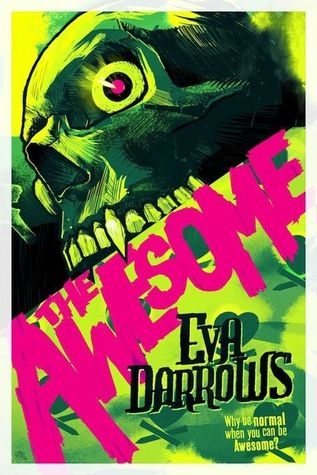 I can say that this book indeed fits the description as given by that dictionary. This book caused me feelings of fear and wonder and also awe, and it was also extremely (if not epically) good!

We have vampires, goblins, ghosts (ectoplasm everywhere, yay!) and a whole lot of other mythical creatures. Add to that the hunters who hunt the ones that are naughty and you have the book. Oh I forgot one thing, sex. Yes, ladies and gentlemen, sex. This book is clearly not for the kiddies. There are at least 2 sex scenes, one extremely (but very funny and awkwardly done) big scene with a lot of coughs interesting details.
Now I hear you wonder, sex? Why? Why is sex such a big deal. Well ladies and gentlemen, it is easy. I know you all probably heard that Vampires lust on virgins? Yes? You did? Fantastic, then you can imagine that a virgin hunter going after vampires might not be such a good idea. Yep, you got that right. So yeah, a a big chunk of the book is about Maggie’s hilarious quest (and her failures) for The Sex. And yes, it is The Sex. 🙂

I can honestly say I was feeling a bit awkward during the sex scenes, but for some reason the author wrote the scenes in a way that it was funny, it was hilarious, it was awkward, and most of all I just couldn’t turn away from the catastrophic stuff that was the first real time of having sex. So I must applaud to author for this. Normally I really don’t feel comfortable reading about sex scenes. I feel like I shouldn’t watch/read about it. Privacy and all that.

Now let’s start with the characters. I can honestly say that it has been a long time that I truly loved all the characters in one book. Even the bad guys just got a little piece of my heart. Sure they were bad, but they were also so silly and hilarious to read about.

Maggie, ah Maggie, the fantastic, hilarious, kick-ass Maggie. A girl I really loved and I was just cheering for her. I felt sorry for her at times. Having such a mom, dear lord the embarrassment of it all. No one should walk in on their mother when they are doing such things, especially not when one has their boyfriend with them.
Maggie was a wonderful character, I loved her quest for The Sex, and I loved that she owned everyone’s asses in many fields (that paintball scene was just pure love). I loved that she referred herself as The Awesome (yep, say hi to the title of the book).
She was a bit gullible at times (I won’t say when, because that would spoil things), but in general she was a smart girl who really wanted to be a hunter and be able to do higher levelled stuff. Now she has to stay at home, because otherwise bad vampires will chomp on her neck (and no, this is not advisable, especially not considering the vampires in this book… well are a bit more deadly than your average vampire).

I loved that apparently being a hunter, and the monsters were pretty much a common knowledge thing in the world. At first I was worried when Maggie’s future boyfriend found out she was a hunter. I thought, Oh dear, here we go, this is going wrong. But then I found out that no one apparently cares about it. That sure, they found it awesome, but they didn’t find it odd, strange or something else. It was highly interesting, since in most books with hunters (those that I read at least), hunters have to be silent about their jobs and what they do for work. It was just delightful to see that apparently being a hunter is just awesome, though a bit crazy, work.

The mom, the boyfriend, her best friend. I loved them all. The mom was just like Maggie, kick-ass, though I also found her a hypocrite (no spoilers, you will have to find out yourself).
The boyfriend, aww, he was just adorable and I loved him and Maggie’s relationship. They sure make a cute couple and I hope they will stick together for a long, long time.

The book is one big trippy rollercoaster of (yes here is the word again) awesomeness. And it is one book I would highly recommend. If the cover and blurb haven’t pulled you in, then I hope this review will convince you to try it out. You will laugh your ass off, you will cheer, cry and be angry at things that happen. And after the book ends, there is just one thing you want (and it is something I want too), you want more of these characters. You want more stories, I see potential that this one could easily have 1 or 2 more books. After all, we still got various things that could be told. 🙂

Now the last part of this review will be dedicated to some quotes that were just pure awesomeness and that I truly loved.

*You know those horror movies where the silicon-inflated babe totters down the street in stilettos while a werewolf lopes after her at six thousand miles an hour? All I have to say is, “Bitch would have gotten away if she’d picked better shoes.”

*Where am I supposed to meet kids my age? I’m home-schooled, remember? And whose fault is that, Miss ‘I’m going to beat Joey What’s-His-Nut’s face against the monkey bars ’til I knock out his front teeth’?

That put her above Prince Maxi Pad, or whatever the heck his name was.

Song lyrics. I could do that. Row, row, row my boat until my eyeballs popped out of my skull.