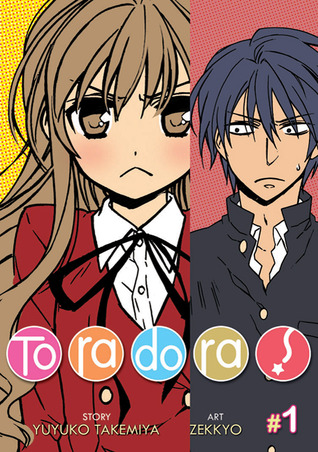 I watched the anime many years ago, and I decided to start with the manga.

I can honestly say that I like the anime more. There is a lot of dynamic, lots of action in here, that just doesn’t translate well to print. A lot of the humour is lost (to me) and I don’t like Taiga that much.

Taiga in the anime was a total bitch, but in this one she is that even more. Or it just has been too long since I last watched the anime. 🙂 Either way, I found her actions particularly mean and rude. So our main character isn’t allowed any happiness, even though he promised he would keep her secret a secret. She keeps interfering and being annoying. Her attitude is more of a girl aged 3 or 4, or one that is 10/11. Everyone has to conform to her and her alone. Dare to come close and she will be sure to practically kill you. As expected, she has barely any friends. This is a big reason why I rated the first volume a 3.5. Attitude is fun, but Taiga takes it a few notches to far.

Our main character, I really liked him. He hasn’t changed from the anime and he is still himself. I really liked how everyone was scared of him, but soon they find out he isn’t that bad. He is just a guy cursed with scary eyes. 🙂
I loved his crush and how he acted. You don’t see that often, a guy who stutters or blushes when they get close to their crush. Mostly it is the other way around.
I really like him, though I wish he would speak up against Taiga and just tell her no. Screw it that your secret comes out, screw that. No one deserves being treated as a dog.

One fun thing though was that I could imagine the characters with their anime voices. 🙂 I could just hear Kugimiya Rie shout as Taiga.

The art is decent, it had a few hitches and bad spots, but all in all I liked the art.