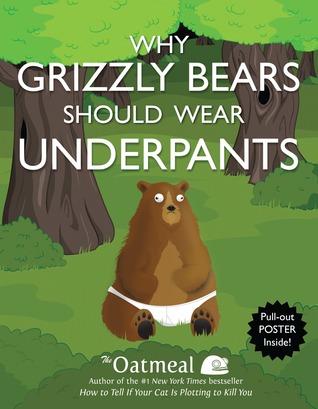 Another book by Matthew Inman, or the Oatmeal and another book that I really liked.

The book contains new and old comics. The old comics I mostly skipped since I still remember them (yes, even though it has been years for some), but I loved the new ones. They are funny, at times a bit rude (but that is the Oatmeal for you), crude, but 100% hilarious and at times I (and also my boyfriend) were nodding or laughing along with some of them. Like the email-addresses or the whole what to do when your pc doesn’t work (Microsoft = reboot/Apple = buy new one/Linux = whole code thing + various other things).

The book features some short stories, some one pages stories, but also some spanning several pages that form one big story. It is quite varied and that makes the book unique and also more fun. Don’t get me wrong, I love short one page comics, but at times I also love reading the bigger ones that take longer. Sometimes I just don’t want things to end.

The illustrations, well what can I say, they are typical The Oatmeal style. Silly, the humans often look alike and a few other things. I think I could recognize his style anywhere.

However this kind of book is hard to recommend. You need to like the humour, you need to not mind that genitals are flying around or that curses are really overly present. I would say, try a few out, and see if you like them. There are also enough comics that are more mild and less harsh.