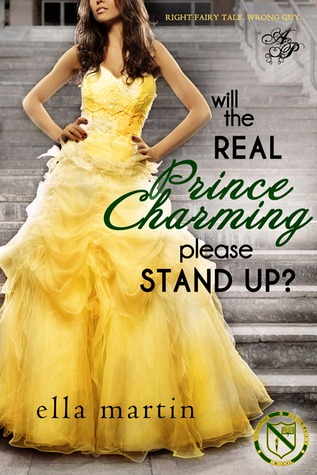 Wow, this was a wonderful book.

However, I must say that people shouldn’t be fooled by the cover. The cover makes it seem like a cutesy/fluffy read, and that isn’t this. This book deals with some serious problems and while it is packed in a finding-your-Prince-Charming-package it is still all real.

Our main character is a wonderful girl, and while at times I was shaking my head, I was also so darn proud of her. Her boyfriend is abusive/possessive and some other bad things, but she isn’t scared off by this (at least not for his words). On the contrary, she clearly says no when she doesn’t want something, or tries to get her boyfriend and her friends together to do something. She makes compromises and tries her best to have her friends, her boyfriend and her life balanced. However… it doesn’t always work out.
I could really see why she stayed with the guy. Sure he is possessive and stalkerish, but until that one hit, he never harmed her. So I can imagine that she forgives him and tries again. Of course, it isn’t good, and I would have preferred her to kick him to the curb, but I can imagine why she tried again.
I loved how normal she stayed, even when she won certain events. Normally girls would change or act strangely, but our main girl just stays the same as she always is. Doesn’t care about dances or dresses or fancy things.

Also sorry, what is so wrong with dating a guy just because he is cute and pays attention to you? I have read enough books and seen enough real life situations that the couple in the end really loved each other. Sometimes love takes time to grow. Sometimes you just don’t know if you really like a person.

Her friends were awesome, though I got really tired of one of her friends attitude. Yes, we know you don’t like the guy, yes we know you hate him. But come on, that attitude of total bitchiness has to go. For quite a bit of the time she took the top spot on most disliked character in the book. Yeah, you read that right, I didn’t dislike the boyfriend that much. At least he was interesting. The only thing I saw of that friend was anger and a bad attitude and nothing else. Every time she came up in the story, I would sigh and roll my eyes.

Then we have the boyfriend. Wow, what a dick. That is all I will say, and I also hope, for all that is good, that he won’t do this to more girls… though considering the ending and what happens there, I am sure there will be others, and I feel for them. I hope they will get out of the relationship safely.

All in all, this book is awesome. It is about finding your prince Charming, about relationships, about abuse and about a whole lot more, and I would really recommend this book.