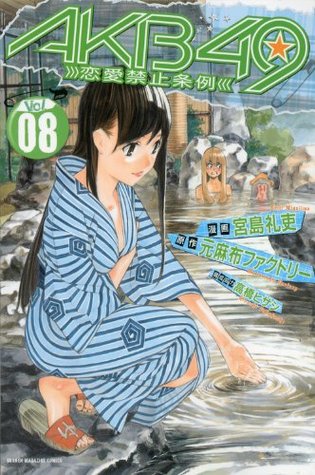 Normally I would do a 3 volume review, but I just wanted to do a review for this one alone.

This was one of the worst volumes in this series. It was boring and I didn’t enjoy it at all.

Instead of featuring Minori/Minoru and his struggle to crossplay and become a great idol in AKB, this one was mostly about the struggles of Okabe and Hiroko. They both need to find love or experience something to be able to sing their debut songs. However, both of the characters aren’t really my favourites. Okabe especially is just an enormous bitch. Even in this one, maybe it is not nice, but she kind of deserved that guy getting his friends. She calls him for a date, then demands all kind of stuff, hits him and some other things. I found her highly rude and I could imagine that no one would ever date her. If she is always so bitchy about things.
Then she magically meets Minoru and voilà romance and love. It was a bit too cliché and silly. I know love at first sight and all that, but why does everyone fall for Minoru/Minori. It just gets a bit boring and lame. Instead of being enchanted, I am bored or laughing at it.

Hiroko was so-so, I didn’t like her story and I don’t think kissing someone on the cheek is the same as kissing on the lips. But hey, she got some life experience.

I really hope the other manga volumes will focus on Minori/Minoru again and that we will get to that single soon enough. It gets a bit boring when it keeps being delayed or that things aren’t right yet. Just do it already.

The art is still at times a bit off. People’s faces look like they just got punched, eyes that look strangely off and some other things.