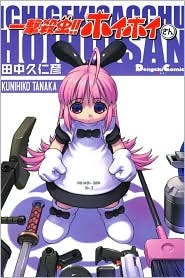 Hoihoi-san has been a favourite character of mine since I saw the (sadly, very short) OVA a long time ago. I found this manga at a convention last year, but totally forgot about it until I found it again a few days ago. 🙂

The manga is sadly pretty short, and it made me wish for another volume (or maybe just a whole big series).

At first we start with Hoihoi-san and slowly the cast is expanded to Combat-san and PEST-X-san. We also have various human characters. People who are fan, or people who are absolutely terrified of the whole concept of Hoihoi-san. I am not sure where I would stand if Hoihoi-san was real. The fact that the insect population exploded and thus there was a need for an extermination doll says to me that I would probably not want to live in such a world. I am already terrified of bugs and the fact that Hoihoi-san or one of the other extermination dolls would report to me all the gruesome facts and/or would stack a pile of these dead insects next to me… nope, nope nope. But, you can put Hoihoi-san (and the others) in off mode, so I might get one just for collection-sake and then hope that they will never switch on.

There is also some romance in this manga. Sadly, it is one-sided and also because of a misunderstanding (the guy thinking that the girl loves Hoihoi-sans and such). Still it brings a lot of hilarity and comical situations.

There is only one character I didn’t like, and that is the friend of the girl who hates Hoihoi-sans. She was a total manipulative bitch and expected her friend to do all the work for her. During Doll-ke she just left her friend alone and went off to have fun/find stuff she wanted. It was just frustrating, a real friend wouldn’t do that, or at least discuss it with her friend.

I liked the manual things, on how the dolls worked and how they should be used. For instance, Hoihoi-san should never be used with other company’s dolls, this will end in war.

There are also parts about the company (companies) that make Hoihoi-san and the other exterminator dolls, and those parts were really boring. They were also a reason why instead of a 5 stars, this manga is getting a 4 star rating. It is a shame. I can imagine why it was added. So we would see a bit of behind the scenes stuff, but I wish they hadn’t done it.

The art is pretty great and I really enjoyed it. Sadly, good art meant that the bugs were also very creepy and scary. :\ I really loved how Hoihoi-san and all the other dolls looked. They also had various wonderful outfits, that were drawn really well.

All in all, this is one manga I would recommend. It is a fun little sci-fi manga with good characters and cute (though at times a bit gruesome) dolls.