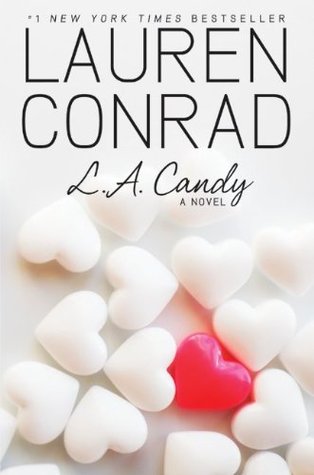 I decided to buy all the books from this author.

Yes, author, as until today I didn’t even know who Lauren Conrad was or what she did before/during the making of these books. I read another book by her some time ago, but back then I didn’t really care to check out more about the author. While reading reviews for this book though I read about her being an actress/being on a reality show and some other things. So my rating is just me and not because of the author/actress.

Instead of continuing with the other series, I decided to start with this one instead. I have had some hints to stuff happening in this series in the other series and I also wanted to know more about our queen bitch Madison (yes, even though I disliked her, I was still interested in seeing if she was different in this one).

This book was, just like the first book in the other series), great. I really enjoyed my ride through L.A and Hollywood. Sure, it was a bit confusing as my mind was still with the other girls in the other series, but soon I started really liking Scarlett and Jane.

The book was mostly centred around Jane and Scarlett, we see the drama unfold through their eyes. Though, confusingly, we also get a few chapters from the POV of other characters. Which was a bit confusing, as I kept waiting for Jane or Scarlett to talk, but instead found myself looking at events through Trevor’s or Madison’s eyes.

I really liked Jane, well at least in the beginning. Near the middle/end I was just tired of her behaviour and the way she treated Braden and Jesse. But like I said, I liked her in the beginning. She was really the girl next door and she was really interesting. I cheered for her when she found a job, cheered for her when she said yes to the show. I liked how open and innocent she was.

Scarlett was really my favourite character. She is smart, sassy and has an answer to everything. Some might find her annoying but I was just so happy to see a character like her. And unlike Jane, she didn’t really fall for the tricks of the reality show. She stayed herself, tried to help and warn Jane when things didn’t go right. I felt sorry for her, for how things went between Jane and Scarlett. I am not sure if it was entirely the shows fault though, or that things were already shifting between them. It was quite realistic though and I really was interested to see how it would go between these 2 main characters.

We also have a whole score of bad boys (and bad as in really bad, players and dicks). Braden was just bleh. I really didn’t like how he couldn’t pick between girls. Then we have Jesse who was just horrendous. He was quite cute, but I already felt that something was up with him. Something that would break Jane. Something that would turn our drama up a notch or ten.

The story itself was fun, it was really fun to read about the reality show and how things worked. Though it wasn’t really reality, everything was rehashed, redone and more redone until it was perfect. Fake friendships happened and a whole lot more.

It is funny, I absolutely dislike reality shows on tv, but I love them in my books. No clue why that is. Maybe someone else knows or someone else has the same thing as me.

All I can say is that I really enjoyed this book. I would have given it a 5 star, but I didn’t like how Jane changed and turned into what she is now. And at times the drama was just hilarious. But other than that, I enjoyed it and I would recommend it to people who are interested in reality shows or just like a dose of drama.