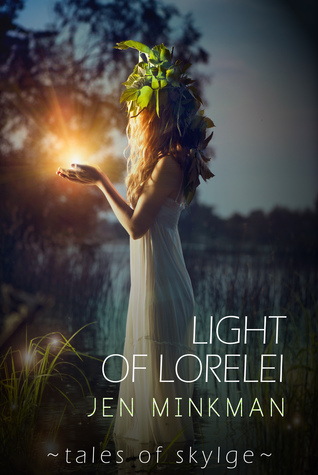 I received this book from the author in exchange for an honest review.

Wow, just wow, just so much wow. I am amazed, Jen Minkman has talent, but with each new book I see her talent grow and grow. This book was absolutely amazing.

Since I didn’t read the description of this book I was a bit confused when we had a new main character. A girl named Aska. I thought it was just the prologue but after a few more pages it became clear that she was our new heroine. It took another few pages for me to get used to the change and to the change of setting.
Instead of being with Skylgers we are now in another part of the island. This time no fishermen huts, this time we have a convent. A convent for girls who sing to deter the Sirens/Nixens.

Aska, ah I loved her. She was an awesome character and I loved her will to continue with things. Even though things look bleak for her, after all she is a bastards child and she is stuck in the convent for life. Unlike the other girls who can escape after a few years, she will be stuck there forever. It isn’t an easy life, knowing that any friends you make will leave within a few years, will leave you alone.
Of course she isn’t always strong, at times she breaks down and cries, at times she is angry. But all are emotions I understand. I would feel the same, never having known your parents, knowing you are a bastard child, not supposed to live. Stuck forever in a convent (or as Aska calls it: Prison).
Yet, she finds a goal in her life. She meets up with Royce and Enna (yay!) and also with a guy named Tjalling (no spoilers on him, though I will talk about him in a bit). She decides to help these people, decides to risk everything for them, even lying to her best friend to get what she needs.
I loved how strong she was during the later pages, she really changed. She was already strong, but you could just feel her hopelessness seeping through. By the end though, she has a purpose, she found someone, she found something and she knew she wasn’t alone any more.

Now for the other characters. I loved Melinda, or Lin as she was also called. She was a magnificent side-character and I loved her relationship with Aska. I won’t spoil much, but I do hope we will see this girl back in the next book. She is just wonderful and she deserves to find happiness. I felt afraid for her during the later parts of the book, I was worried something would happen to her, something would pull her away from the safety that she is living in.

Tjalling, ah Tjalling. I am still not entirely sure what to think of him. During the first part I found him mostly creepy and a stalker. I mean seriously, how often can you meet up with someone coincidentally? It was just too suspicious. I had my suspicions about him being (insert word that she can’t say due to spoilers), but it was still fun to see it really happen. I was also still shocked that it happened. I really loved that it was added and it made the story even better than it already was. It makes the situation as it is on the island even scarier.
I loved loved him during the later parts, especially near the end. Ah, that was fantastic.

I am not sure if it was intentional or not, but I loved the little hint to the Edison vs Tesla thing. I didn’t notice it in such a big amount in the previous book, but it is pretty clear here and I am delighted to see it here.

One thing I didn’t entirely like was the cursing. It felt out of place, like it didn’t belong. It didn’t happen often, but when it happened it was just awkward. I would be like: “Wait what? Why do you suddenly need to curse?’

Oh, one thing I really have to mention. I loved the LGBT parts in this book. It felt natural and like it fitted. I was sad though to see it was only one-sided, but it still warmed my heart every time it happened. I just kept hoping for these 2.

There are various fun plottwists happening in regards to the Sirens/Nixens and also to Aska’s past. I can say I did NOT see that coming what happened on page 94. I loved it though, but it took me by surprise!

The Sirens/Nixens part was scary and gruesome. I felt sad for all those people who were lost. But after we find out things, I can imagine why the Sirens/Nixens do it. The reason it was so sad, it made me angry. This all could have been prevented! But greed does strange things with men.

Also big plus points to the gorgeous cover!

All in all, I can’t wait for the next (and last) book. I do hope we get to keep Aska as main character though, and not get a new character. Sure, I still want Enna too, mmm, so maybe a Dual POV? 🙂
I would really recommend this series to everyone!