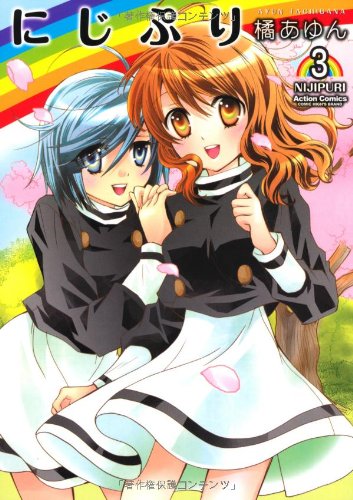 Wow, what a disappointment this series turned out to be. It had all elements of a great series. Boarding School + Shoujo Ai = (normally) Love!

Sadly it was not meant to be. There was unnecessary fanservice, weird and unbelievable romance, annoying characters and barely any boarding school feelings.
I think I will stick to Strawberry Panic the next time I need my Shoujo-ai/Boarding school fix.

I kept hoping for some form of romance between Reika and Mihane, and sure, there were some sparks, and we had a cute ending. But I expected more. They barely hugged (and no, that we-need-to-warm-up-so-let’s-undress-and-hug-awkwardly from book 2 doesn’t count), they never really kissed, and it took them 3 books to get to a confession… No, just no. From a first love, from something that was so cute it turned into a dud.

I also liked Reika better when she still had her long hair and her aura of richness and ojou-sama-ness. The new Reika was boring, plain and I couldn’t see why Mihane still liked her senpai that much. Reika kept toying with Mihane, approaching her, then retreating again. I wished that Reika would toughen up and be honest with Mihane.

Mihane was pretty boring and I wasn’t really impressed with her. If anything she just annoyed me with her attitude and her clinginess was just frustrating.

The art was also weird. Like I mentioned in the previous reviews, the characters look way different at times. Mihane goes from curly to straight with curly ends. Then we have Reika, she went from long and curly and sharp eyes to short/different coloured hair and different eyes. It was just awkward and it took me some time to get used to them again. I also liked them both better when they looked like they did the first time.

The only one I really liked was Aoi-chan. She was great and brought a big deal of comedy and also some fun rivalry in the story. Too bad we couldn’t get an ending with her ending up romantically with Mihane.

Would I recommend this series? Nope. This book was yet another bleh volume of the same drama, the same stuff. Rehashing is fun when you have a big series, but it is a big no no when the series is very short.