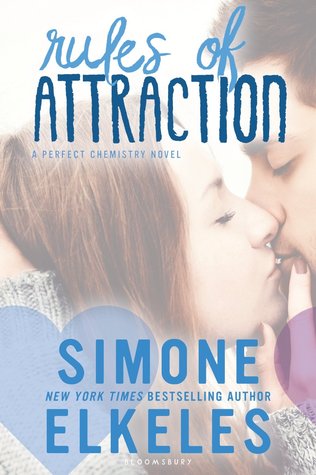 I didn’t like this one as much as I did the previous book.

It was a combination of rehashed story (bad boy + gangs + drugs + suddenly falling in love with girl) + slightly bleh characters. Oh don’t get me wrong, I still really liked the book, but it wasn’t love. It wasn’t like the first book. I would say the book suffers a bit of Second Book In a Series Syndrome.

Carlos just felt too fake. While Alex felt pretty genuine and I really loved him, it took me a long time to like Carlos. He also felt like he was just acting up because he could and because of his past. Unlike Alex who didn’t have a choice, Carlos had a choice but picked the wrong one. Instead of trying to confide in someone, he pushes away everyone, pisses off the wrong people and tries to do everything himself. That is nice, but I wish he had gone to someone sooner. Now it felt just silly. Like a little kid like him could stand to go against a drug lord/gang lord.
I also didn’t like his attitude. I know that deep down he was a pretty nice guy, but he didn’t show it a lot. He tried to hide it. I disliked how he acted towards Kiara, and I also don’t understand why she fell for him. I am sorry, but even if a guy is nice sometimes, he is also a bully a lot of times. The way he treats girls is horrendous. I know, it is partly an act to look tough, but I hate it when guys put up an act like that.

Kiara was no better. I liked her for quite a bit of the book. Loved her when she pranked Carlos, but I disliked her stuttering. It just was distracting. How at times she would talk normally around Carlos and others, but at other times she would be stuttering. I can imagine that it has to do with how nervous someone is, but it just felt fake and unnecessary to me. And it ruined quite a fair bit of the romantic parts. FINALLY, we would have some romance, and there goes Kiara again. Stutter stutter stutter. ARGHHHH….
But it was cute to see her fall in love with Carlos. Slowly, but surely she was falling.

One thing I didn’t like is how fast they went from kissing and hugging to almost having sex. I am not one to appreciate things like this. I like my relationships to take time, to build. Now it felt a bit silly and more like they had a bad case of teenage hormones than love.
I know that in the previous book our characters also went pretty fast to sex, but at least with them it felt believable. They had liked each other for quite a bit, and they were ready for the next step. Carlos and Kiara weren’t.

The story itself was pretty good and I really liked it. I liked to see the chemistry between all the characters. I really loved the professor, he is a wonderful guy who does everything for his friends and family.

The ending was really nice, though I am sad to see the decision that Carlos made. I wish he had picked the other choice.
Oh and I really liked the last part of the story. While it was a bit predictable and silly, it was still wonderful that we could have a peek in the characters future.

All in all though this was a good book, but I didn’t entirely enjoy it all the time. It took me 2 days to get through it. I am hoping that the next book will be more fun and filled with more love.