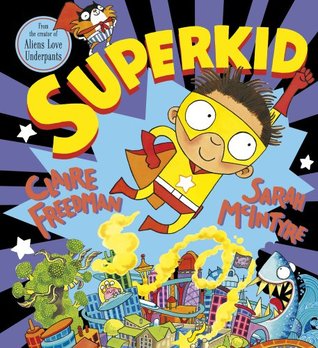 Another one in my ever growing collection of books illustrated by Sarah McIntyre.

And not only because of her, but also because the blurb just sounded like a wonderful thing.

This time we have a kid who is secretly a superkid who saves the day. Bullies, sharks, broccoli, they all should be afraid of superkid and his mighty little side-kick: The classroom hamster.

I really liked the main character. He was set as just another character, a boy that people would probably overlook, and that is the best disguise for a superhero. Someone who doesn’t stand out too much, who is more often found in the shadows.
It was really fun seeing him go in superhero mode and help out everyone.

Also we have some cameos. The sharks are back in this book, I really liked seeing them again. They might not be exactly the same, but they still behaved the same (still hungry for nom nom humans).

I liked that we had a super hamster, though I thought at first it was a cat (the ears and how it looked), but when we see the kid change, you also see the hamster. And then you can clearly see it is a hamster.

The illustrations are colourful and fun. There are tons of details (Sarah McIntyre really loves adding those).

I think this book is perfect for kids (because don’t most kids have big dreams of being a hero?), but also for adults who just want a fun and happy book.