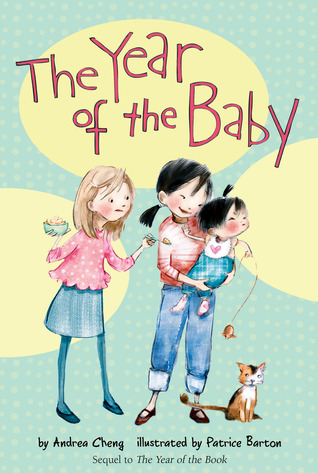 I was at first a bit hesitant to get this one. I loved the previous book and I was worried that this one might totally be different (after all the first book felt like a standalone to me).

But in the end I just went for it, and I even pre-ordered the next book. I am so glad I bought this book, it was wonderful and cute.

We are back at Anna’s place again, only this time we have a new family member. A little Chinese baby named Kaylee. I absolutely loved Anna’s relationship with Kaylee. I know that many kids wouldn’t be too happy to get a new sibling, but Anna was delighted and did so much for Kaylee. Not only helping out her mother with things like diapers or stories or singing or even putting Kaylee to bath, but she also played with her sister and helped her out with her eating problem.

Yes, while this book comes across as fluffy and fun, it is about real problems, real situations. Kaylee is a baby from China, abandoned by her parents due to the baby policy in China. For some reason she barely eats, barely talks and there are various other things that aren’t going all right.
This isn’t the only problem/situation we have. We also have a situation that I won’t say right now (as it would be a spoiler), but it was a big thing and it explained quite a lot about a certain character in the book.

Anna is a terrific character and I really liked her. She was fun, happy and again, I loved how she was around her siblings, her parents, her family and her friends. She is a great person, full of love that she is willing to share with everyone.
I loved how she decided to say no against the science fair project that was first proposed. I am glad she did that, I was kind of worried she might go along with the girls, but instead she stood up for herself and said no. She decided to go for her own project, one not just copied from a book.
It was really fun to see her do all kinds of things, helping her little sister. Kaylee is one lucky kid for having such a wonderful family. A family that helps her out.

I was at first worried about the whole baby thing. I thought it might turn out to be an annoying baby, or a baby that just kept whining/crying. However, Kaylee wasn’t that. She was just adjusting, I can imagine everything is scary for such a little kid. I hope she won’t have much of a trauma about her real parents abandoning her, and I hope she will continue her good (and at times adorable/cute) progress (it was so adorable with her talking to the cat, and saying no or mine when the cat came close to the mouse toys Anna made for Kaylee) in the next books.

Anna’s best friends were terrific. They are truly best friends, helping out Anna with her problems, learning Chinese (Laura) and various other things. Anna is lucky to have such wonderful friends that will be with her side when she needs them.

I loved her science project. Not only was it a true project, but it also helped out someone. It was fun to read about the observations and to see what happened to the subject.

The ending was interesting, I didn’t expect it, though I had suspicions it was about that and how that went. It is also quite a happy ending (despite the sadness that came with it for a little bit).

All in all, this is a book I would really recommend. Are you looking for a great Middle Grade book about real problems but still with a lot of happiness? Then I would recommend this book.