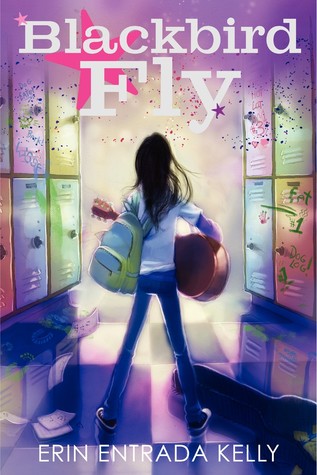 This was a wonderful book, but due to some stuff in there, I can’t rate it more than 4 stars.

Let’s start with the good stuff first. I really liked Analyn/Apple for most of the book. Her struggle to fit in, her troubles with her mom, her trouble with expectations it all felt real and I was really cheering for her to stay positive through this all.
I also loved her love for her guitar, for the Beatles and for trying to keep the memory alive of her dad. Her dad, who died so long ago, and who her mother tries hard not to think about.

I liked the fact that Analyn/Apple is from the Philippines, and I love how she tried to keep holding on her identity, but also trying to become more American. Her problems at school, and the way people bullied her was really real and I while I don’t approve of bullying or mean people, I do appreciate this was added. I would have found it all weird if she was accepted just like that.

I loved the setting, it was really interesting, but at times also a tiny bit boring.

The twist near the end (No spoilers), but I really liked that. I didn’t expect that to be the case. Wow, nicely added. 🙂

I also didn’t like how she treated her mom throughout the book. I can imagine why she is so grumpy, and I can understand that her mom isn’t always the smartest about things, but seriously? She was just mean and rude. Never once thinking that maybe her mom is hiding a big loss, that her mom is sad, but doesn’t want to show it. That her mom is trying to raise her kid in the best way possible.

And her quest to get a guitar? Meh. It was also a bit anticlimactic that she could

But, all in all, I really liked this book. It was realistic, it was fun and while Apple/Analyn is at times a bleh character, she is real, she is growing up and I was cheering for her throughout the book. I would recommend this book to everyone.