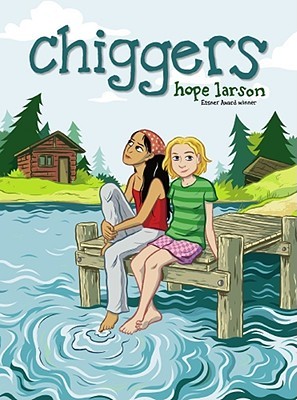 I was looking forward to this book. But in the end, it was boring. The characters were bleh or bitchy and there wasn’t much happening but a whole crap load of teenage drama.

The whole book takes place during camp. Now, this is normally not a problem, but all the drama and all the stuff that is happening just make it bleh. I didn’t enjoy it, there were some camp stuff, but I missed quite a few things that I also wanted to see.

The characters were horrendous. Either they whined, bitched or didn’t have any guts to say anything. Abby was a dreadful character, at times I was just confused. She would find Shasta nice, then turn around and be unkind to her. I wish she would just have picked one side. I did like how she tried to defend Shasta with her other friends, however I sometimes found that she did this just to proof something.

Shasta, I am still not sure what to think of her. I don’t tend to like characters who brag and brag and brag. And then also try to take revenge for something that another character did. I also didn’t get why she didn’t take her medicine. They are there to help you, why would you not take them?

The other girls were just horrendous. None of them (not even Abby’s long best friend) was really particularly nice or interesting. They were all a bit too 1-dimensional.

The art was at times just ugly. Sometimes it looked good, but at other times I was wondering if the artist was even taking this stuff seriously or just liked drawing ugly human beings.

The title is nice, but I think another title would have been better. The chiggers don’t take that much of a spotlight, so it felt a bit weird they get such a big part of the book (I think the title is a very important part to a book).

All in all, I am disappointed. I will give the book 2 stars. For the cover (which is pretty decent) and for the summer campish stuff. I would not really recommend this book.