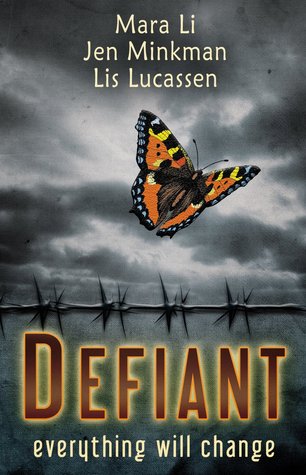 Received this book from the author in exchange of an honest review.

I already reviewed The Island, so I won’t read that. See my review for that book here: The Island #1

Wow, this was one hell of an interesting story. What would have happened if Hitler had won the WW II? Well, we kind of find out in this book. I won’t spoil anything, let’s just say I had my suspicions when they mentioned ghettoes and angels and Jews, and then it was confirmed later. Wow, what a twist. It is nice/interesting to see someone tackle this subject. It is not the first time I believe (I know I saw an English book somewhere that was kind of about the same thing, just set somewhere else), but still it is interesting.

We have 2 POVs. Emma and Uriah. Emma was a really nice character, though I didn’t particularly like her in the beginning. She was weak, spoilt and a bit weird. But later on I started really liking her. Still her decision was a stupid one. Didn’t they tell her the number one rule of being a spy? Never tell anyone. No matter how close that person is!
I felt sorry for her, that she had to lose her sister and her parents.

Uriah was a great character and I really liked him, I wish he had gotten more time to talk, tell us his story. He only had a few chapters, Emma got the most of it.

The book starts off at an already grim part, but the middle and latter part of the story are absolutely dark and grim. The camps are horrific, there is rape, hunger, murder, sickness and a whole lot more. Even with all this happening we got a strong cast of characters who will fight, who will keep going. Even though you can also clearly see that they are human. They are afraid, they worry, they ponder if it is a good idea to go with the plan, to fight, to try to get out. It was all really realistic.

The only thing that was a shame was the ending. I know, it is a short story, but still I wanted more closure. Did Uriah and Emma survive? Did the baby? Or any of the other people? How will the world go, did they do anything to beat the horrible situation that still persists in their world? I am so curious and I felt sad that we will never know, unless of course the writer makes a complete book about it.

All in all, I will be giving this story:

The third and last story in this book. I am not sure what to think of it. Frankly, I didn’t particularly like it.

The world-building lacked a lot. So we have 2 sides. Stateless and Sectorates/Sectorials…. but why? What happened? Why did the world/city/whatever the place is, split up? How do you become a Stateless? Is it based on colour? Based on Race? On something else?

Most of the book took place in some courthouse/tribunal, and it was just so utterly boring to hear the court stuff, to see our main character fail in a lot of stuff.

Justa and Aron were interesting characters (well especially Aron) and maybe I would have liked them more, had the situation been different. If the world had been build more, if they had seen each other outside of that boring tribunal.

Justa was just an idiot and a brainwashed person. OMG, there is a witness, OMG Aron must have lied! Let me not think for myself just for a moment, or think about the magical coincidences. *rolls eyes*

It was disgusting what they did to Aaron, and as there was practically no world-building it was disturbing. Why did he get abused so much? Just because he was Stateless? Or do they treat all their prisoners as shitty as him?

And then we have the sudden truth about Justa’s family near the end. Sorry, but I think this would have been better had it been done earlier. Now it felt weird. Oh hey, the book is ending, let’s just quickly solve this little issue about Justa and give her a little bit of backstory.

Near the end we really get a whole information dump, but sorry by then I couldn’t even care any more. Give that information at the beginning or spread it out. Don’t just dump a whole bunch of information when your story is ending.
The ending was interesting, but I am not a big fan of open endings like this. Will there be more? Is there a story with more world-building, a better ending and better crafted characters?

All in all, I can sadly not give this story more than:

This book was a mixed bag. There was an awesome story (The Island), a good story (Red Messenger) and one (sadly) bad story (The Tribunal). While they were written by different stories they all feature dystopias and romance.