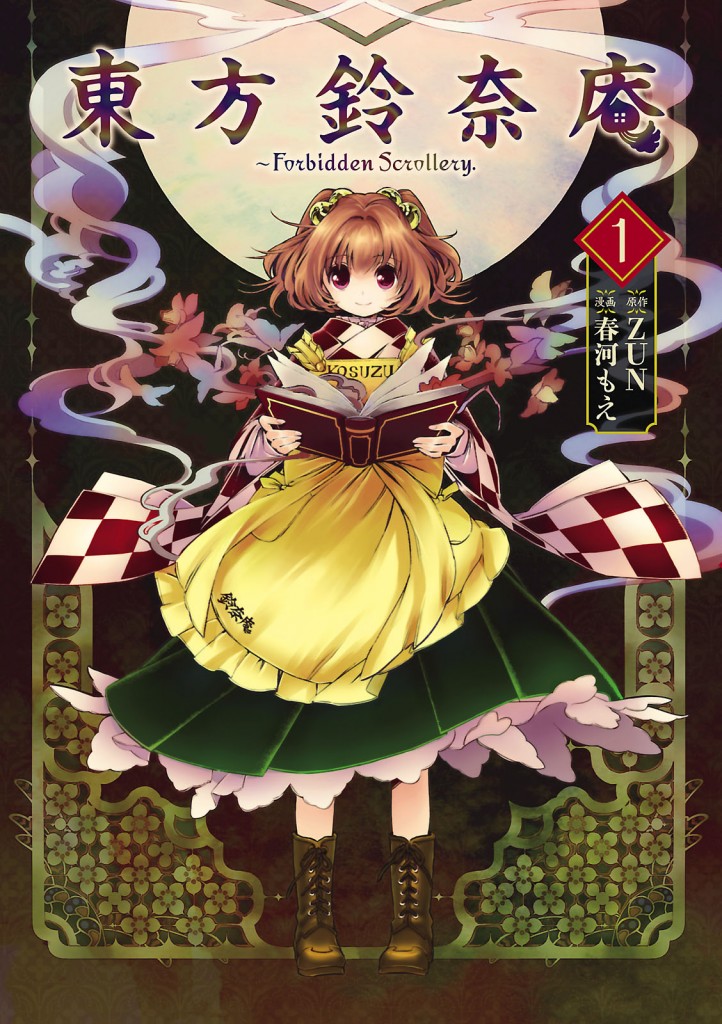 I have decided to read this, I have been interested in Kosuzu for a long time, and I never knew I could find the manga this easily. 🙂

The first 2 volumes have been a wonderful ride. Not only do we have Kosuzu, but we also have Reimu, Marisa, Mamizou and countless of other touhou characters. We also have a few newer characters, like Kokoro from Hopeless Masquerade and Shinmyoumaru Sukuna from Double Dealing Character. I was delighted to see them all make an appearance. I was a bit worried that we would only have Kosuzu and Reimu and Marisa.

Most of the volumes are separated in arcs. Two chapters would often form one arc. It is quite important to follow the stories as they are written/drawn, since sometimes things that happened are talked about again, or something happens with a certain item that was also used in another story/arc.
The stories are all fun and supernatural filled. Most have to do with spirits or youkai.

Kosuzu’s library/book store is gorgeous. I really wish I could live in Kosuzu’s library/shop, I can see myself spending ages there, reading stuff. Translating books and having a good time. Filled to the brim with books. Old, new, imported. Yes, imported. She gets shipments from the outside world. Which leads to hilarious things like the one time when she was reading about the Berlin Wall falling down. She was saying that she hoped that no one was hurt and that the wall must be poorly constructed for it to fall down like that. And there are more references to the outside world like this. Not always from books or magazines, but also word by word stuff. For instance, Marisa telling Reimu about organic farming and that it is all the rage in the outside world. 🙂

Kosuzu is a really interesting character, I love her ability to translate books no matter what language. I would love that skill. Then I can read anything, anywhere. That would be lovely.

And that brings me to the art. I loved it. It is cutely drawn, but at the same time it is also serious looking. I enjoyed the character designs, everyone looks so pretty. The backgrounds are also gorgeous with a great big deal of details.

I will be sure to read the rest of the manga. One volume to go, and then it is waiting for the next one to come out.

I would recommend this to everyone, however I would also recommend that you read a bit on the touhou world. This way you will get the references and you will also know the characters.