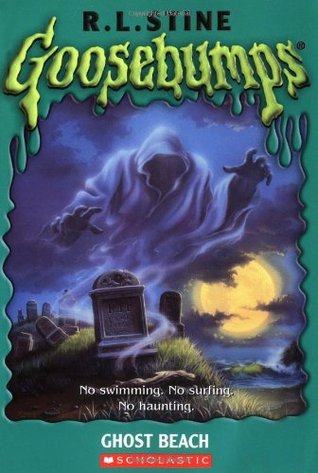 This was a pretty boring book for most of it.

This mostly lay in fault with all constant: “No, you can’t go to the cave! Why? Well, because it just is!” And then they wonder why the kids go off and explore said cave. Of course they will, your piquing their interests. They are curious about that cave, about whatever lives in there, ghost or not.

The whole actual ghost thing was pretty lame and I already had my suspicions quite early in the book. :\ It was just too predictable and too easy to guess.

I didn’t particularly like Jerry, at times he was acting all macho, but other times he was just a wimp. His sister on the other hand was awesome. I really liked her. She had some cool hobbies that I would also love do (but can’t, because we can’t just go to a graveyard and rub graves, that is just not done). I also like how brave she was at times, she really did most of the things. Often saving Jerry’s ass because he was frightened again. 🙂

The ending? Typical R.L. Stine ending. Sudden plot twist and now we will never know what happened to those kids. A bit of a shame. I can imagine it is done to make everything seems frightening and scary and shock you, but all it did was confirm my suspicions and annoy me.

Would I recommend this book? Not really, I would suggest you pick another Goosebumps book. There are quite a few good ones, though most of them also have that bleh ending.