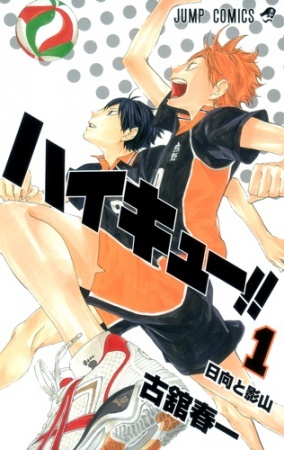 I heard a lot of people who loved this one. I was a bit hesitant, I am normally not a big sports manga/anime fan, but I heard this one also had comedy. Sadly, I didn’t like the manga as much as I hoped I would.

Mostly this has to do with the lack of comedy. The only comedy is the interactions between Hinata and Kageyama. Sadly, after 2 chapters I was just annoyed with them and wished they would just kiss and make up for once. Rivalry is ok, but this is just lame and repetitive.

Hinata’s behaviour just got a bit meh, though I must say I like his spirit and how he just continued with things even when things didn’t look that good. How he battled his way through stuff, never giving up. But, he is also an idiot, easily tricked and has a way too big of an ego. And he really needs to learn to handle his anger.

The same goes for Kageyama. I disliked him a lot. Big ego, mean, rude, and things are only ok, if he is the leader. He just annoyed me a lot.

The volleyball stuff just got annoying, I expected some more slice of life and comedy parts between it. With some more information on Hinata, some more fun parts about them (the team) forging a friendship and having a good time. Maybe this will be all done in the next volumes. But I won’t read this manga any further. I might try the manga. Maybe it will be more fun to see this manga animated.

I don’t really get how the team is together. They seem all mean and rude to each other, I don’t really see a team forming out of these people. I really hated how they disregarded people who were smaller than them. It makes me sick that these people are in a team. They don’t deserve it.

The art is typical for this kind of manga. I am not entirely sure if I like it, at times it is a bit crude and seems ugly.