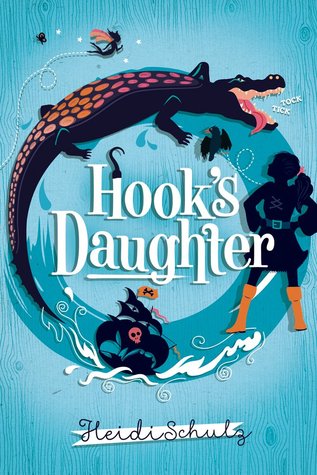 Let’s go back to Neverland with this awesome book!

This book was terrific. I finally have a new kick-ass heroine to add to my list! Jocelyn is just a wonderful character. While she is a total tomboy, she also doesn’t mind girly things at times.

The book starts off with an introduction and takes place at Jocelyn’s grandfather’s place, then in the second part of the book we are at a boarding school/finishing school and lastly we are finally in Neverland!

Jocelyn is totally awesome, I really like it when girls kick some ass, and she is really doing that in this book. But, she is also showing her human side by being afraid, by worrying, by wondering about things. I really loved this and Jocelyn was quite a diverse character.
I loved how she took her heritage and just went to do it. Though she didn’t expect all the problems she would encounter.

Problems like several very annoying boys (Lost Boys + Peter Pan), a crocodile that is just a bit too much too handle, cannibals, bad pirates (yes, you also have really bad pirates) and several other things.

It was delightful that most of this book took place in Neverland and how everything felt like it came from the original book. A lot of the things that were mentioned brought me back on a nostalgia trip. Fairy villages, Tiger Lily’s village, Lost Boys, Pirates. Of course Peter Pan, just brought me on a nostalgia rage party. Seriously, I never really did like him much. I hated his attitude, how he treated girls/woman (And no I am not a feminist, I just don’t like it when boys treat girls like shit), I disliked his lack of responsibility and there are several other instances. I was already glad we barely saw much of Tinkerhell (not a misspelling, this is one of my many names for her).

I do wish we had seen some more of Captain Hook, he is one of my favourite villains. Luckily we still get enough references and also some backstory about him!

The only thing that could make this book more awesome (yes, it is already awesome, but it can always become more awesome), would be if there were illustrations. Now the only illustrations we get are at the chapter beginnings.

I would highly recommend this book to everyone who is looking for a new book about Pirates, Kick-ass girls and a nostalgia trip back to Neverland.