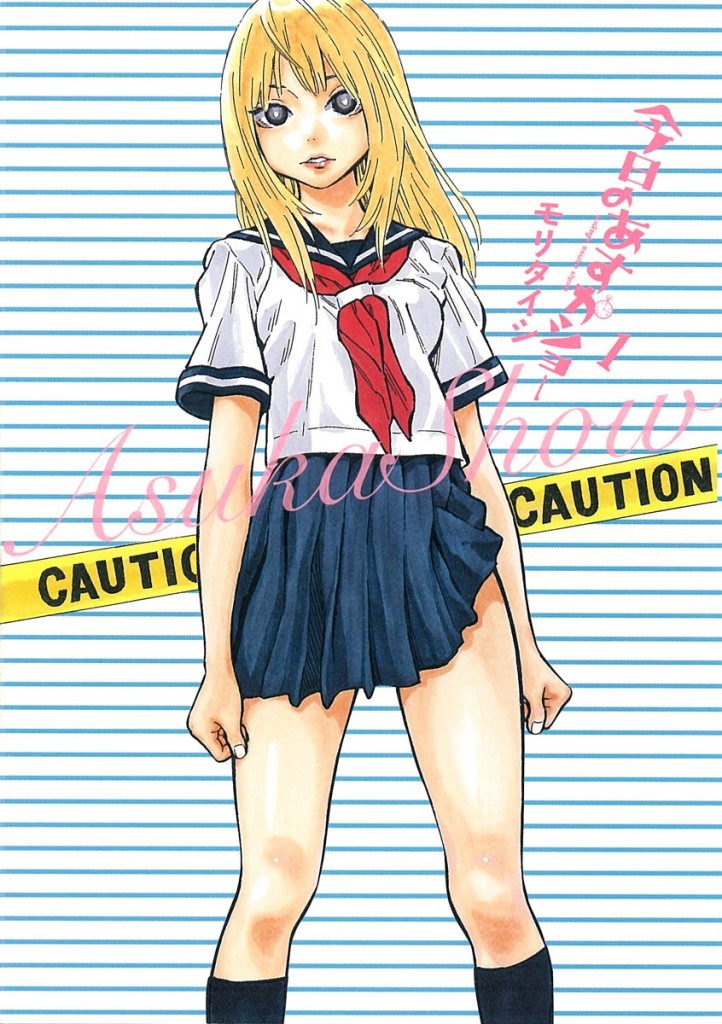 I found this manga while searching for something new to read. My, oh my, this one is wonderful and fun. Too bad there are only 4 volumes, and the stories are pretty short (as you can see around 150 pages a volume). Luckily there is also an anime (which I will check out soon!).

Asuka, oh dear, that girl is kind of oblivious to all that goes around her. Walking around with her skirt tucked in her bag and not noticing until someone tells her, walking around in a swimsuit during a typhoon, because hey, then you should be allowed to wear a swimsuit. It also doesn’t help that she apparently has no mom who can tell her about things. Instead she has a dad who is quite the pervert (though not towards her, thank Lord). He does his best to tell her to dress normally, or warns her for stuff, but Asuka mostly just does whatever she wants. 🙂
But Asuka is also straight to the point, and while often oblivious, for some things she just got a radar and she will tell the guys off immediately. The poor guys. Even the ones trying to help her out (though most have lewd reasons) are being told off. Expecting her to go all girly, but then finding out that Asuka doesn’t think like that. For instance with the skirt in bag thing, the guy thought he helped her out and that she would be delighted. But she turned the tables on him and asked him if seeing her butt was ruining his day. You can imagine the guy’s reaction. And this is just one of the many times this kind of thing happens. Guy thinks x will happen, while Asuka turns the tables and gives them y.

Every chapter is a new day in Asuka’s life. She is enchanting the hearts of everyone around her, especially guys. It is really fun, the panels are quite big, there is often not much text and everything is pretty fast-paced. Still, I think this is what makes the manga so addicting, so much fun. I don’t think I would have liked Asuka’s antics if the chapters were longer. Now they are just the perfect size.

We also got various recurring characters. Who keep on seeing Asuka do something silly/hilarious/wrong.

The art is decent, though not best. At times the faces look like they were in an accident and the bodies just look a bit weird. But, I think this fits with the manga. It is a fast-paced manga, and the most important thing is the gags and the puns and not the art. Of course, I am still happy to see that the art is decent.

However, the manga is at times pretty ecchi. You will see a lot of pantsu shots, and there are a few instances that she is lurking in the park while couples are having almost sex. And 2 chapters focussed on bathing, with naked boobs and other body parts.

But, all in all, I will have to recommend this manga. Are you looking for a silly manga? Don’t mind a bit of fanservice? Then you might want to check this one out. 🙂