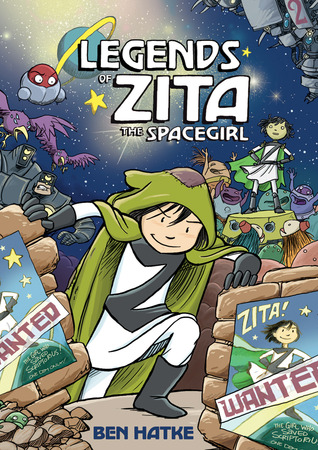 I decided now was the time to get book 2 and 3 in this amazing series. I really wanted to know if Zita would ever return home.

This book was amazing, wonderful and great. However, while I rated this a 5 stars, I had 2 things that I didn’t particularly like.

Number 1 on the list is that robot/copy robot thing. I liked it when we first met it, I thought it was cute that a robot had someone she looked up too, but then she did certain things and was mean, rude and and overall body stealing bitch, and I didn’t like her. No, not even during the end where she kind of redeemed herself. Clones, people trying to copy other peoples are things I don’t like, especially when they are mean, rude and just bleh.

Number 2 on the list also has to do with that robot. How did no one notice that that wasn’t Zita? Sure, one can say Piper noticed quite soon, but still, why didn’t he take action? He left the real Zita! I would say people who have been around her should have seen that there is something different. The way she talked, the way she acted. It amazes me that they just didn’t notice!

But those 2 things are the only things I had a problem with. Other than that, I loved this adventure. Zita is really awesome, she is strong, she kicks some ass, but also shows emotion. She is sad and angry when she finds that Piper left her alone, but she is strong and determined when she decides to go after him.
I know some people might have lost hope, after all will Zita really get home? Will she finally be able to get back to her family? Yet, while everything seems bleh, she never gives up, though we see that she really wants to go home, she even dreamt about her home.
I hope she will go home, however, I am also conflicted. On the one hand, I would love for her to be able to go home. On the other side, she will have to say goodbye to an awesome world, new friends and other things. Can she say bye? Or will we find something that gives her the option to travel back and forth between the worlds/dimensions.

We also have a new kick-ass lady. A woman named Madrigal who Zita encounters. I won’t spoil anything else, but let’s just say I love Madrigal and I really hope that she will be around more in the last book. It was really interesting to see how a few characters are connected to her. Characters I didn’t really expect to be connected to her or one of her crew.

The book ends quite good and I really loved what happened with the battle. Zita will have new things to do, people to save and I will be reading the next book in a bit, because I really want to know how Zita ends!

I would really recommend this and also the previous book. Do you like sci-fi stories? Do you like strong girls who have a goal, but will also look further than that? Then read this one!