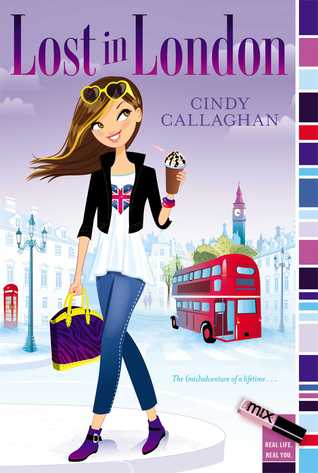 For something called Lost in London, I expected more Lost, and less of a girl who knew everything about London and knew exactly where she wanted to go.

Our main character was pretty great. I loved that instead of shopping, she preferred to go out and see the sights of London. I also love how she tried all kinds of stuff out. Not only foods, but also words and also tried new clothing.

Caroline was a bitch. I am sorry, I didn’t like her one bit throughout the book. Even when she was nice, I was just sure that she was acting, because otherwise her mummy and daddy would be angry and she might not get her precious stuff. And sure, I know with the ending she turned better, but I still don’t and won’t like her.

Sam was a great character, though I hated the whole phone thing that kept popping up. Once was fun, Twice was so-so, but after 3 or 4 times I just was thinking that he should grow up.

Ellie, I am still not sure what to think of her. Most of the times, I just thought she was annoying and an idiot. She was just so frustrating.

Sebastian? Seriously, what is up with that guy. Even to the last page, even when we found out stuff, I just wanted him erased from the book.

I loved what they did to Caroline, the bitch had it coming.

The whole robbery stuff? I didn’t feel like it fitted with the book. Especially since we already had quite a bit of things going on. Caroline + attitude, a new place, new friends, Sebastian’s stuff.
But it made for a nice ending, I was at first worried that they would just skip it and not resolve that little problem.

The sights and touring through London were fun and I really enjoyed them.

All in all, a pretty decent book, but I still can’t give it more than 3 stars.