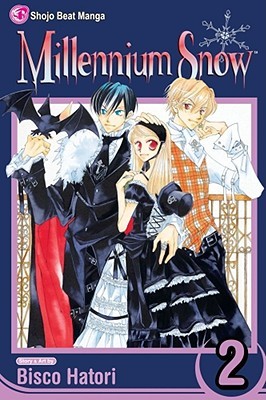 I have been planning on reading this series for some time, but I never got to it. And now I had a chance to read them for a challenge, so I took that chance. 🙂

These 2 manga/this series, I think I would have enjoyed it more had I not read it after I read Ouran High School. Because while this manga was great, there was a lot wrong with the art. A lot of the characters even looked like they came from Ouran High School. Touya looked a bit like Kouya (added with a dash of Tamaki). While Satsuki looked (and acted) a lot like Tamaki. Then we have someone named Keigo who seemed a lot like the twins from Ouran (same behaviour, same scary obsessiveness with a girl). And then we have Chiyuki, who looks a bit like Haruhi, but with a dash of crazy girl Renge. All in all, it was quite annoying. I know there are more mangaka who have one kind of art style and were all the characters look like a bit of combination of their other works.

Add to this that the art wasn’t the best. I know (now) that this manga was Hatori Bisco’s first work, but when I started reading the manga I expected the wonderful art that was so loved by many in Ouran (and also by me).

The manga story itself was pretty good. I really enjoyed Touya and Chiyuki’s relationship, though it was a bit too deredere for me. You guys, everyone can clearly see you love each other. Chiyuki is pretty vocal about her interests in staying with Touya, but Touya keeps pushing her away, then clings to her, pushes her away again, and while it was interesting to see, it gets a bit annoying after 2 volumes. Seriously, it reminded me of a certain couple in Ouran. Only that one took around 17 volumes….

I didn’t like Satsuki that much. He was rude, mean and a player. I didn’t like how he tried to have sex a few times with Chiyuki. Who clearly didn’t want it by the way. It was all very awkward and it didn’t make me like him more. I also didn’t like how he didn’t get the hint. Chiyuki clearly doesn’t like him. Not more than a friend anyway, so it felt all a bit desperate. He can get all the girls, but he is desperate for the one he can’t get. *rolls eyes*

I have one character I disliked more than I did Satsuki. And that was Keigo. God, he was a dick. And he will also be a dick. I can imagine why he did all the things, but he will just have to see that Chiyuki isn’t his, and that he can’t force her or tie her to stuff, just because things don’t go according to his mighty plan. There is brotherly/cousinly love, and then there is just one being over-obsessed and scary. While I am sure we will meet him again in the next volumes, I hope there will be less of the whole obsessed thing, because otherwise I will just skip to volume 4 and the ending there.

The whole disease thing was interesting. I do have a feeling we will have a big thing happening in the coming 2 volumes. After all, Chiyuki was only healed temporarily. She needs more blood or become Touya’s partner so she will live on. I can’t wait to see how this will written/drawn. I hope it will be done in good fashion. I always hate it when authors/mangaka only suggest what happens and then leaves the rest to the mind of the readers. For some series this might be a good idea, but I feel for this one that we will want conclusion.

All in all, so far this one is a pretty decent series. Not as good as her Ouran High School series, but that is kind of to be expected considering this is her first work.