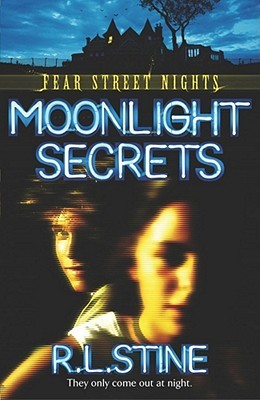 I bought this (and also the second book) at a book market on Thursday. Little did I know I would devour these books in one day the day after.

R.L. Stine’s books are often hit and miss for me. Often there are several things I don’t like, he often makes endings that make no sense or suddenly have a plot twist. But, this one is a real exception. I really loved this book.

And this was for various reasons. It was creepy, it had great characters, good mystery and lots of lovely scary moments.

In the first part we have Lewis and Jamie as main characters, focussing on how the Night People were created, how they started things, and how everything went bad. This part of the book seems small and insignificant, but believe me, it is a big thing and you will find out in the second book what really happened (though I already had my suspicions). I won’t spoil anything, just that I really liked the first part. Then we get the second part (and the parts following that) were we follow Nate and all the magic creepy stuff that happens to him and his friends.

I really liked Nate in this book, he was great, though he had some things that I didn’t particularly like. He has quite a mean streak, and he follows his best friend a bit too much. I didn’t like how he acted towards Candy. I can imagine why, but I still won’t agree with it. No matter how vile a person is, no one deserves to be made fun off. Not like this.
But, he was also strong and brave. Trying to live through his life, get through school and make sure he didn’t die.

There are also other characters that are all awesome or great. We have Ada, Jamie, Lewis, Shark (though I didn’t like how he acted towards Candy. Dude, we know she dumped you and she is a total bitch, but no need to humiliate her like that) and various others that all play a role in this story.

Two things I didn’t particularly like was the fact that kids could drink beer like this. That apparently the guy at the bar couldn’t care that he had underage kids in his bar who were drinking themselves silly. I don’t mind some beer drinking, but this was just ridiculous. They went to the bar every night, and drank beer all the time? *rolls eyes*

Also the fact that when they found something in the Fear House, that they just took it all with them. That is stealing. I know, it has been hundreds of years, but you all should know the Fear Family and besides that, it isn’t yours. Give it to a museum or be honest about it. But now it just felt bad.

There were lots of twists and turns. Near deaths, magic stuff happening and a whole lot more. Even with Fear Street gone, there is still horror, death and pain happening. You can destroy all the stuff in Fear Street, but you can never get rid of the scariness or the death surrounding that place.

All in all, this book was awesome and I would highly recommend it. Looking for a creepy story? Then read this one!