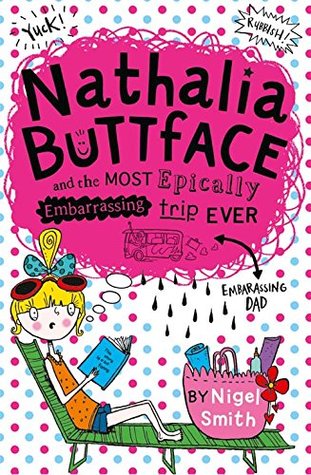 Ah, Nathalia Buttface is finally back again for a new adventure! I am delighted to see that this series will continue, since it is such a fun one!

This time Nathalia is off to France. Her father stupidly accepted to work on someone’s house there, and they could stay there for free. The ones who read the previous book, know how that triggers Nathalia’s Dad. OMG, it is free? I must have/do/go to it. It is just hilarious how often that brings him into trouble. And the same happens in the book. The house is a wreck. No one can do it on his/her own in just a few weeks.
Add to that: being on a barge/boat and breaking everything it comes in contact with (yes, another free thing that Dad agreed to), people with big egos, ghosts, ducks, spoilt Baron and his even more spoilt (though mostly looking for love) son.

The book was once again a rollercoaster of fun and hilariousness. But, I have to say, that I really liked the Dad in some situations. The whole Darius stuff? How Dad saw this was going bad, and he just took Darius with them? I loved it. Even though the dad seems stupid at times, he can clearly take a stand and show that he cares and wants to protect the people around him. But other than that, the dad was hopeless once again. Taking on every free job, embarrassing Nathalia again (a lot of times, and this time in France and on international tv. Poor girl).
He is not really the smartest, the house was already breaking down… well with the help of Dad, it wasn’t going to get better.
But at least he tried, and he did his best. That is a lot more than you can say of other idiots. 🙂

I loved the whole Dad’s pants part in this book. I so agree with Nathalia, you shouldn’t wear pants that you wore when you were a kid, no matter if you can still wear it somehow. I loved how it came back a few times until a certain event happened. 🙂

Nathalia was fantastic in this book, though I got a little bit tired of her complaining and whining. I know, I know, it wasn’t the dream trip you wanted, but you are in France. Not everyone can say they go there just like that! And yes, everything goes wrong, but try to lighten up and see an other side of this. Try to have some fun. Sure, you still will have to keep an eye open and make sure Darius and your dad don’t kill something or accidentally blow stuff up, but other than that, try to relax.
I loved how she handled Darius though. I don’t think many girls or for that matter boys, can say they can handle Darius. Most would just be killed or at least be so afraid that they would run away.
And then she got another guy on her hands. She is a busy girl, but she knows how to handle them both, and it brought some hilarious situations.

Darius was a big surprise in this one. He was quite interesting in the previous book, and while he disgusted me often, he also had a surprising new side in here. Apparently he is amazing with fixing cars and helping around fixing other stuff. I didn’t expect it. But I guess, it is just like him being a math genius, Darius has many sides to him, and he generally just shows the destructive one.
We also saw more of his home situation, and I can say that I feel sorry for him. His brother is not that kind to him, no one really cares about him, and I can see why he turned out to be like he is now. I think if he had a mom and/or dad who really cared for him, that he might have turned out different. Maybe with still several disgusting skills, but he might be a bit kinder and easier to handle.

The whole France trip and getting to France was hilarious and I laughed quite a few times during the whole trip. It is amazing that they got to the place alive and in one piece.

I didn’t particularly like the Baron. His duck fetish was hilarious though, especially after what happened to his precious ducks. I think the Baron must learn to share and care about other people. But I guess, money is all to him.
If only he saw that he also had a son who wants love and attention. A son who loves his toys and stuff, but who also wants love. And not being called by a duck whistle would also be a nice thing for the son.

I was delighted when I found out at the end that we will be getting, yes, yes!, a third book!!!! More Nathalia Buttface, I can’t wait! I will be sure to buy it when it comes out.