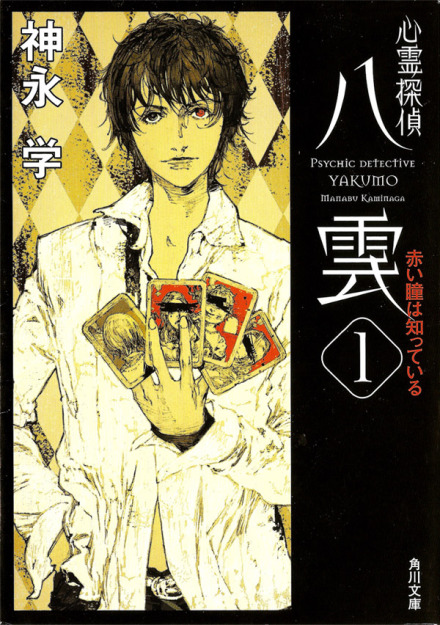 I watched the anime for this one years ago (and I am really planning on watching it again). I finally found out someone (sadly not official) was translating the novels. So I immediately dived on it and now I got them.

This book is split up in 3 files. The first one is where we will learn all about Haruka, her sister and Yakumo. And of course in true Yakumo fashion, we also got a mystery on our hands. The first one is about an abandoned building, ghost, murder and more! I must say I really loved the first story. It was great fun to read about Haruka and Yakumo’s bantering and the mystery was pretty dang creepy. Of course, I also had fun trying to solve the mystery myself. I did a fairly good job. 🙂

The second one is about a spooky tunnel. Apparently people see dead things there, and every year there is a death happening. It was a very interesting file. It wasn’t only about the tunnel, about murder and death, but also about Yakumo’s past. We meet his uncle, we find out more about Yakumo and how hard it was for him to have that red eye and also to see ghosts. The ending of the file was pretty, and while I had suspicions, I was still shocked with that ending. I never expected it to be like that. If anything I thought he just bought the car and that it wasn’t his fault. But now with the ending and knowing what Yakumo said earlier in this file, I really despise that guy. Urgh. I hope he will get punishment for what he did.
Oh, and I forgot, there was also some lovely interaction between Haruka and Yakumo!

The third one is about a mysterious death, burning houses and about Haruka’s friend Shiori. It wasn’t really my favourite story. It didn’t have much supernatural in it. The only exception was Shiori who kept popping up everywhere. Other than that this file was more about a crime/mystery and how to solve it.

Then we have an extra file. Yakumo is searching for something. I really enjoyed this little extra story, especially the twist near the ending was really good!

The translation is pretty decent. There are some grammatical/spelling mishaps, but all in all, I must say the translators did a pretty good job on it. Maybe they could have run a spell-checker on it, as there were a few little spelling errors that could have easily been prevented.

The characters were fantastic. Yakumo was typical Yakumo. Lazy, a bit grumpy and at times thinking he is super smart, but you can still see that he is a sweet guy underneath a whole pile of bleh. And who blames him? His life hasn’t been easy. Hated by many, disbelieved by many, mocked by even more, his life hasn’t be the best. I feel sorry for him, and I hope with the coming of Haruka that he will open up, see that life isn’t always bad.

Haruka, she is still a bit of a dimwit. A lot of the things Yakumo finds out are things that everyone could have spotted, if only they kept their eyes open. But I really like her. She is really relatable and she is a great character. She is also the first one to accept Yakumo and that also tells us something about her personality. I also liked that they gave her a backstory, a reason to truly believe in Yakumo. To see that his powers are the real thing.

Then we also have various other characters. Like Yakumo’s uncle, who is trying his best to help Yakumo. Even doing certain things to try to relate more to Yakumo. Then we have Gotou, a detective and someone who believe in Yakumo. Who asks for Yakumo’s help quite a few times. Even though at times it feels like he is exploiting Yakumo, I also see that he is a really good friend of Yakumo and is trying to help him out as much as he can.
And lastly, we also have Miki. The best friend of Haruka (at least so it seems). I don’t know much about her, but she seems like a nice girl.

One thing that was a shame was that there were no illustrations. I kind of missed that, it is something that I always find in light novels, this one is really the only one so far that didn’t have any illustrations. Which is a shame. I was looking forward to some yumyum Yakumo images. Yes, yes, I confess. Yakumo is hot!

I will be reading the other novels as well. Hopefully they will all be awesome, and hopefully Haruka and Yakumo will get closer. 🙂 I am also hoping that someone (Yen Press? Kodansha? Someone else?) will pick up this series and translate them officially. I would love to have these books on my shelves.